You ever wonder if there is anyone out there, no matter what they do, that become great without really working hard? I think that you can get to certain level, a very high level, without being super dedicated. But I think that the really great ones are pretty hardcore about the whole dedicated thing. Like they set aside pretty much everything when they are going for it all, going for their goals. And they push through injuries that would sideline most everyone else and they get up early and they eat just right and basically do what they need to do to leave nothing to chance . One NFL player, whom I was fortunate enough to coach, sets up chairs in his living room as imaginary defenders and practices his receiver routes. And you know that my buddy Kirk Karwoski was 100% into being a world champion. His whole life for years was powerlifting.

I always admired that crazy dedication, that obsessiveness, that great folks have inside themselves. If you talk to someone who doesn't have it or has never seen it, they don't understand at all what you are taking about. Its like talking to folks about how great hunting is. Until they experience it, they will never get it.  My son is 14 and a royal pain in the ass but he is obsessed with hunting. He finished 4th in the world in  junior goose calling and fifth in duck calling by practicing off of YouTube for hours every day. I am not bragging on him. It's that obsessiveness that made him beat the kids with their professional coaches.

And regarding obsessiveness and athletics: It is not , by any stretch of the imagination, about health. Yes, you want to stay healthy so you succeed in sports, but I have never known anyone who , when trying to be great, thought about their health in terms of longevity; it was all about winning. Hell, the toughest son of  bitches in the world are bull riders. I'm obsessed with watching it. I'm obsessed because of the toughness and athleticism that they show. And of course, I love the fact that they love America and don't disrespect the flag. And they don't have any guaranteed pay, which makes them super hungry. I love football and even have a couple of former players in the league, but I won't watch a down. Ever again.  Anyway, bull riders are more than obsessed. Every time that they get on a bull, they can die. They ain't worried about health,  they are just worried about being a champion. Even on a successful day, when they complete the ride, the get lacerated livers and broken bones. It's truly amazing to me. 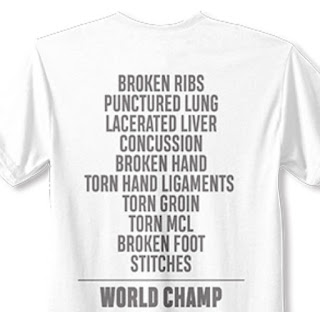 Male personal development. There are workshops to help men become men. I get it. Single families, video games, social media. All of it contributes to boys who stay perpetually immature and well, soft. I'm a huge believer that a strong mind and a hard body make a man a complete man. Many boys don't have the role model to help them , by some sort of ceremony/initiation, to get them ready for manhood. A gateway , so to speak. It's pretty funny when I hear kids talk these days, the stuff that they talk about. We talked about football, guns, big trucks, fishing, going down to the creek, Evel Knievel. The conversations that I hear are abut video games and snapchat.What kind of crap is that?  Kids need to get dirty and muddy and cuss when their parents aren't around and play with matches and throw somebody to the ground and get thrown to the ground. They need to be able to fight and then shake hands without it being some major deal on the front page of the local paper. A fight? Big deal. Go ahead and fight. Got your ass beat? So what, I bet they learned something about themselves in that fight, win or lose.

I think when they get all of that, they grow up to be different adults. If you grew up shooting guns, you won't be so damn scared of them and want to pass laws against them when you don't know a damn thing about them (except what the boogeyman on the news tells them) when they are vital to a free society. But you don't know about that, you just know that your mom always said bad things about guns all the time, so they must be bad. Because when a kid grows up hard as hell and in nature, doing hard things, they know that there are no timeouts, no trophies for second place, and that nature doesn't give a damn about you, so you better be respectful. If the kid spends all day in the basement eating fruit loops and shooting imaginary people on a screen, they don't get the experience, man! They scream when they fall down, they cry and tell their moms that mean old kid threw him to the ground. And instead of a parent saying, Okay, so what? You want to go to the hospital? No? then stop the damn crying. Oh, that seems so cruel Not to me. All this pussyfooting around kid's feelings because they are so fragile is total bullshit. They can take it and they need to take it. If not,  they become adults who have no direction or moral code. Things like, respect what you kill. Eat what you kill. Gun safety. Sheaf the knife. How to shake hands. Chop that wood.  Kill and clean and cook. Tell them that bears eat their young, that nature is cruel. The cycle of life.  Try not to do wrong, and if you do, man up and take responsibility. That's some outdated shit, I reckon. Maybe , but maybe it'll turn back around some. I can feel that some folks are tired of all the crazy PC bullshit and not being real about life. Maybe some fathers and mothers will rise up and get tired of it all and contribute to the betterment of society by raising the kids without all that crap!

I don't have anything else to say, I guess. I do know that the world is sorta upside down now. Your little circle can make a difference, though. You and your kids. My kids are a pain in the ass, but I am trying to teach them to act like true Americans, proud of their country, hard working and responsible. It's an uphill battle. Lots of distractions out there for them.  Hopefully, if some of that teaching gets through to them, they will develop into something positive for society down the road.