I have a column all ready to go that I wrote about women and lifting weights and why there are stereotypes about women getting bigger and more muscular by lifting weights and society's idea of what a woman should look like, all soft and dainty.  And why some women and some men say, "OH GROSSS!" when they see a muscular or even halfway muscular woman and how shallow that is for them to not consider the work that went in to building that body and that maybe, just maybe, that is how women are supposed to look, and maybe that's the look that they should strive for in their exercise regimen. And doesn't someone who is athletic as hell and looks like she could defend herself to the end look great? 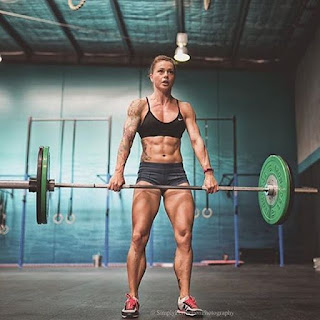 But then I thought, why even go down that road? It doesn't help anything getting all excited about it, people are gonna do what they are gonna do and think like they wanna think.

But then I thought, where did all that come from, the idea that any type of softness is good? Evolutionarily speaking, how did being soft and weak help versus being strong and muscular? I bet the weak couldn't cut it and the tribe left them behind when they couldn't keep up and some saber-toothed something or other had a nice, tender snack. That is just common sense, bygod. But whatever. Get your matching outfit on and do your ten pound curls. I'd rather watch the Crossfit Games and see those girls getting after it like they are meant to .

Zach-Even Esh and I did a podcast the other day, and we were talking about how there were very few overweight kids back when we were in elementary and junior high schools. There was maybe a few kids in the whole school who needed to drop a few pounds. It was unusual. I spoke to a group of high school kids the other day, and by my estimation, over half of them were carrying too much adipose tissue.

And then I was watching a movie about Evel Knievel and they were showing the crowd at the Snake River Canyon and there were plenty of wiry, almost skinny folks but I don't recall seeing anyone with any weight issues. Why is that? Video games!

Just kidding. I have spoken with plenty of smart people that I respect tremendously about the reasons behind the overweight epidemic and there seems to be a general consensus of cheap, crappy food, the prevalence of advertising that gluts our airwaves espousing the positive aspects of high sugar food, the lack of playing outside by youth today, lack of education among parents.

If you are 40 or older, you most likely remember the carefree days of your youth where you played all day and then came inside to eat wholesome, home made food. Meatloaf, green beans, fresh fruit, burgers, salads, etc.  Yes, some ice cream once in awhile, but nobody in my neighborhood went out to eat except on special occasions. McDonald's was reserved for special occasions, like when my Adelphi Boys Club 75 lb football team beat Bladensburg at Fletcher's Field in the mud. But It was just a hamburger, small fries and maybe a small Coke.

I have no answers for it all, no solutions except education and awareness of the issues.

Speaking of nutrition, Joe Rogan's podcast with keto researcher Dom Dagostino was one of the best that I have heard in a long time. amazingly informative. You won't wanna eat carbs after listening to that one, and I'm gonna stop after a slice of my son's birthday cake. Maybe.