Isn't it funny how there are different levels of men? Like rankings of men, if you will.

Some of this is tongue in cheek, so relax.

There are the badasses. These are men who do not sweat the little things. They are usually (in my experience) former college athletes or military or cops or EMT or firefighters or have been through some serious stuff in their lives, stuff that made them realize what is really a big deal and what isn't. These are men who fight for what they believe in. These are men who are strong, and in great shape.  These are men who are laid back when they aren't in action. Men who follow no trends. They are kind to little kids and older folks. And loyal to a fault.  They are men who constantly say, "No problem" and just get things done. They are alpha males in the sense that when stuff goes bad, folks look to them first. They hunt, fish, shoot, eat meat, drink whiskey. And they are smart. They don't accept mediocrity in anything. They give you their all, all of the time. They listen to music with instruments in it. They don't dance. Well,  maybe a slow dance in 11th grade at the Sadie Hawkins Dance, maybe. Usually bearded, usually can fight their asses off and usually listen to Metal and Country. And drive trucks. They love knives. And bars with plywood floors. 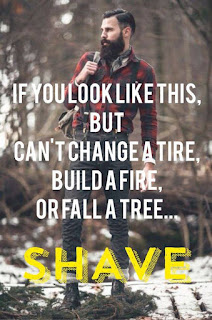 Then there are those men who panic at the drop of a hat, who constantly think that the sky is falling, the Chicken Little's of the world. Oh man, everything is drama and whining and softness and they sorta lift weights and they act like a squat workout is so traumatic. But their numbers are stagnant and citizen-like.  Meanwhile, their own mediocrity is going strong. They are so self involved and self important that they don't realize that life moves on with or without them and nobody really cares. I have known coaches like that: They think that they know it all, but behind their back, everyone is laughing at them. They use big words but those words don't mean anything. They dazzle with bullcrap to those that don't know any better.  I hear the stuff all of the time.  I'm like, HE DIDNT SAY ANYTHING! He just moved his hands around a lot, said some corny expressions  and tried to look wise. They ask questions to hear an answer that they want to hear and when they don't get it, they dismiss the answer as wrong. They criticize what they don't understand. That's easier right?

Of course, they are not self aware enough to realize it. They are usually attention whores. Some hide behind religion as a crutch to excuse their bad behavior or their weakness. They bend religion to fit their needs. It don't work like that, but they don't get it. Jesus wasn't a coward. They are more judgmental than loyal. It's their way or nothing. And their way is usually cheesy, dramatic and self serving.