I was in 7th grade and we had gym class. We had our blue and yellow gym uniforms on. They were like these wool punishment clothes that they made us wear. Didn't matter, we put em on and didn't say a word. We went into a small room next to the main gym and in that room sat a Universal Machine. Basically a multistation stack loaded circuit. Bench, military, curls, leg press, etc. It was pretty cool.It looked some medieval torture device.

Anyway, I thought that I was strong, until my friend, Davrill, benched 20 pounds more than me and he weighed a lot less than me, 25 pounds or so. I got pissed off, and started asking him questions. How did he get so strong? How did he get his arms and chest so big? His chest was bulging through his uniform.  He said, You gotta eat protein, Jimmy, and take protein powder and do your benches, flies and curls. My head was spinning.

Davrill told me that he trained at the Boy's Club near his house. He invited me to go there. I boarded his bus after school and we were on the way. Darrell lived near the Washington DC line, in a rent controlled apartment high rise. This was quite a change for a kid like me from the suburbs.  We went up to where he lived, met his parents and brother, dropped our school stuff off and headed to the Boy's Club.

I don't think there was a squat rack in the place, but there were plenty of big dudes in there with massive chest's and biceps. Legs weren't big back then. It was the era of Arnold and Arnold was all about chest and biceps, and everyone used the Weider Arm Blaster because of that famous picture with Arnold doing ez curls with it around his shoulders. 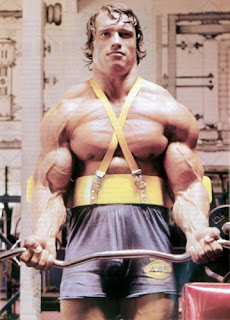 What Davrill had was a bunch of older dudes who cared about the kids in the neighborhood and helped them with lifting if they showed interest. It was a way to keep the kids out of trouble and keep them off of the streets. Those guys helped me as soon as Davrill introduced me. Set after set of bench (feet in the air), probably 10-15 sets, just pumping, and then curls and more curls.

When we walked outside after the workout, I remember feeling so great, my muscles felt filled up, I was tired but a good type of tired, ya know what I mean? That magical pump had taken hold and I knew right then that I loved that feeling and I would be chasing that feeling for a long, long time. I was like, Davrill, I feel great! He said, thats the pump. Jimmy! Oh, I said, I love it!

Darrell let me borrow his muscle magazines. The first one was Muscle Up! Magazine, and had Tom Platz on the cover. And then a Muscle Mag International with Mentzer on it. Wow! People actually look like they do? I was enthralled and read every single word in both magazines. And they were good. Problem is, I took it too far and would bring muscle magazines to school, and instead of focusing on my Algebra, I would read the magazines, hence summer school Algebra. But! I wouldn't trade it for anything.

For once, I had found something, other than football, that I loved, and I was going to learn all that I could so that  pumped feeling would come back again and I wanted know the fastest, best way to get that feeling and also to get super strong and what to eat, and how many reps , and just who is this Arnold guy? A lifelong love, and a whole new world had been discovered.
Posted by James Steel at 12:04 PM