With everybody so offended by every tiny little thing these days, I decided to put a list together of some TRULY offensive things in this world that need to be banned tout de suite!


Words, bad drivers who won't let you merge into a lane, long red lights, big trucks that cut me off, rap music, doughnuts with not enough cream(or creme), CNN, New York City, Flags that sorta look like American flags but really aren't, knives made in China, reality shows, 2 wheel drive pick up trucks, the term "talk shop", cheering of any kind, high fives, celebrations of any kind, rap music, dancing except for slow dancing at the 5th and 6th grade dance at Cherokee Lane Elementary in the late 70's, Three's Company(objectifies women, makes fun of Mr. Roper), high squatters,  rounded back deadlifter's, neighbors that don't wave back to me, whistling, fu manchu's, Wayne Dyer (bare feet), mountain climbing, strength coaches that don't lift weights, politicians, Jane Fonda, vegetable juices, smoothies, Game of Thrones, safety patrols, security guards without guns, small parking spaces, hula hoops, clapping, collared shirts, loudspeakers at drive throughs, coaching shorts, grunting tennis player's, motel's, fish that won't bite, geese that won't come into the decoys, rap music, the terms "grande" and "venti", People who wave at the camera when they are in the background of a TV show, little dumbbell's, 35 pound plates(big time!), honor roll bumper stickers, bumper stickers in general, car dealership's service departments, BOTTLED WATER, grocery clerks(miserable), expensive beer, licking fingers, PEOPLE THAT LICK THEIR FINGERS BEFORE OPENING A BAG WHEN YOU ARE BUYING WHAT THEY ARE PUTTING IN SAID BAG. KEEP YOUR SPIT TO YOURSELF. Katie Couric,  Andy Griffith when Opie got old, little furry dogs, all cats, tighty whities(weird), no see 'em socks, Kiss now that they got old, Andy Griffith when it was in color, and finally, rap music. Offended by all. Please remove or I am gonna freak out. 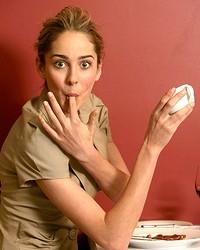