So what's your training been like? Do you take time off for "The Holidays?" C'mon man. It's okay though. I learned many years ago that folks need to decide for themselves when they are going to be dedicated to training or not. Like losing weight or quitting smoking or some other vice that you wish you didn't have controlling you. If you are happy with the way you look or feel and training  is not important to you, wonderful.

However, if you love to train, if it is a huge part of your life, and you always have the FIRE WITHIN, there is nothing wrong with using "things" to keep you going.  I do it all of the time, and I have since I began training in 1979.

What are some of these Things? It can be anything that fires you up for a workout. Examples:

DVD's. I used to watch the Bulgarian Training Hall tapes from Ironmind. I have written about them before, but they were amazing. Max attempts multiple times a day. Broken windows and holes in their shoes. I think one lifter missed a snatch like 20 times and before the coach made him stop trying. His determination was amazing. Kirk Karwoski's "From Cadet to Captain" DVD is fantastic. It chronicles Kirk's training cycle where he finished at the USPF Nationals with a 1003 squat. Crazy lifts done with maximum intensity. 800x5 with just a belt in the squat, 1000x2 in the squat, 800 pound deadlifts. He talks to to the weights, he rages, he dominates the training sessions. And then it shows his training cycle for the IPF Worlds., which is equally amazing.

Books- I just finished Rebel Yell by S.C. Gwynne. It's a biography about Stonewall Jackson, and the Civil War.  What fired me up was the perseverance of the troops despite lack of everything. Some of the troops marched hundreds of miles without shoes, with maggots in their food, with barely a uniform to wear.  Many of the them didn't even have weapons, but still battled with whatever they could bring from the family farm. 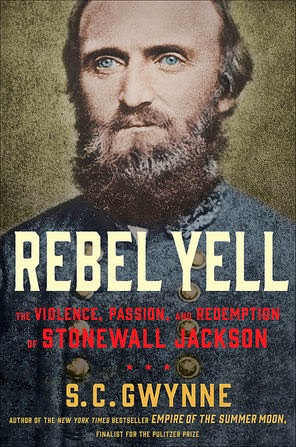 Anything on the Bataan Death March, with Tears in the Darkness being my favorite book. Tough men, tough times, survival. And I just finished Voices of the Pacific. Wonderful book. The book is about the soldiers who are still alive today telling the real truth about those battles.Unbelievable courage and toughness. And they were young, man. If you were 22 years old, you were a real veteran. 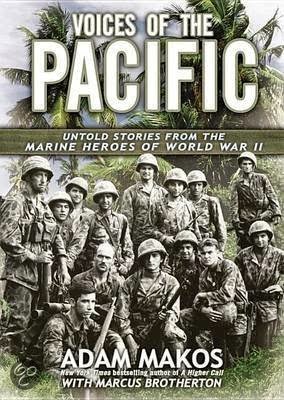 Jack London and Hemingway. But with them, it's not so much the books, and the stories (although they are great). I enjoy reading about the men behind the writings. Jack London did more by the time he was 20 than most people get done in a lifetime. I found this from the Bio page:

"Jack London grew up working-class. He carved out his own hardscrabble life as a teen. He rode trains, pirated oysters, shoveled coal, worked on a sealing ship on the Pacific and found employment in a cannery. In his free time he hunkered down at libraries, soaking up novels and travel books."
http://www.biography.com/#!/people/jack-london-9385499

And Hemingway? Okay, get the bad stuff out of the way, or what society today says is bad, and look at what the man accomplished. He decided that he would be the best writer in the world, and he dedicated himself to the craft. Discipline. Writing everyday, the word counts, the self criticism. He decide to become the best fisherman and in a short period of time, he owned tons of records for biggest fish. He boxed (He had a ring at his house in Key West), and would fight a challenger at the drop of a hat. He saved his son from sharks by diving in and rescuing him. He was in plane crashes and saved himself one time by opening the door with his head. He took young writers under his wing and tutored them. If they showed enthusiasm for the craft, Hemingway went all out for them. And if there was a war? He dropped everything and just went. He even looked for submarines during World War II for our government. Inspiring.

Of course, Marcus Lutrell. Crawled on his belly for seven miles after being shot? Yep, that's something to fire somebody up right there.

And I use people I know that I admire. My Father who loaded box cars to work his way through college. My mom who in her 60's just decided to start painting and now at 81 years of age has won many awards and is the president of the Miniature Painting Society. And they both exercise everyday.

Or I will look at old magazines that I have saved and read certain passages. Here is one about Randy White that I look back at frequently about putting up a fence on his farm years ago. Just hard work. 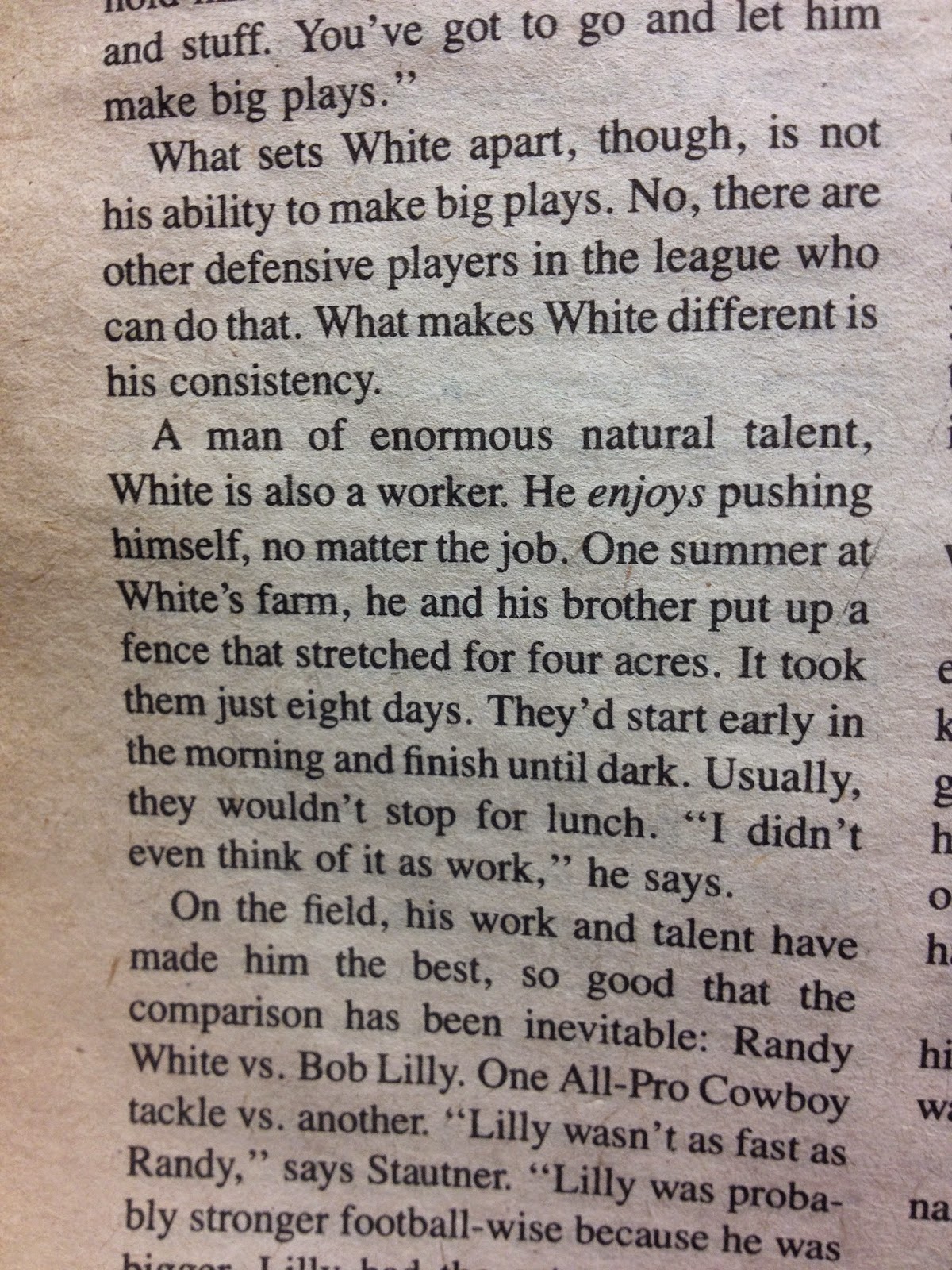 Or this one about Johnny Unitas shoveling coal as a kid and how hard his mother worked after her husband died. 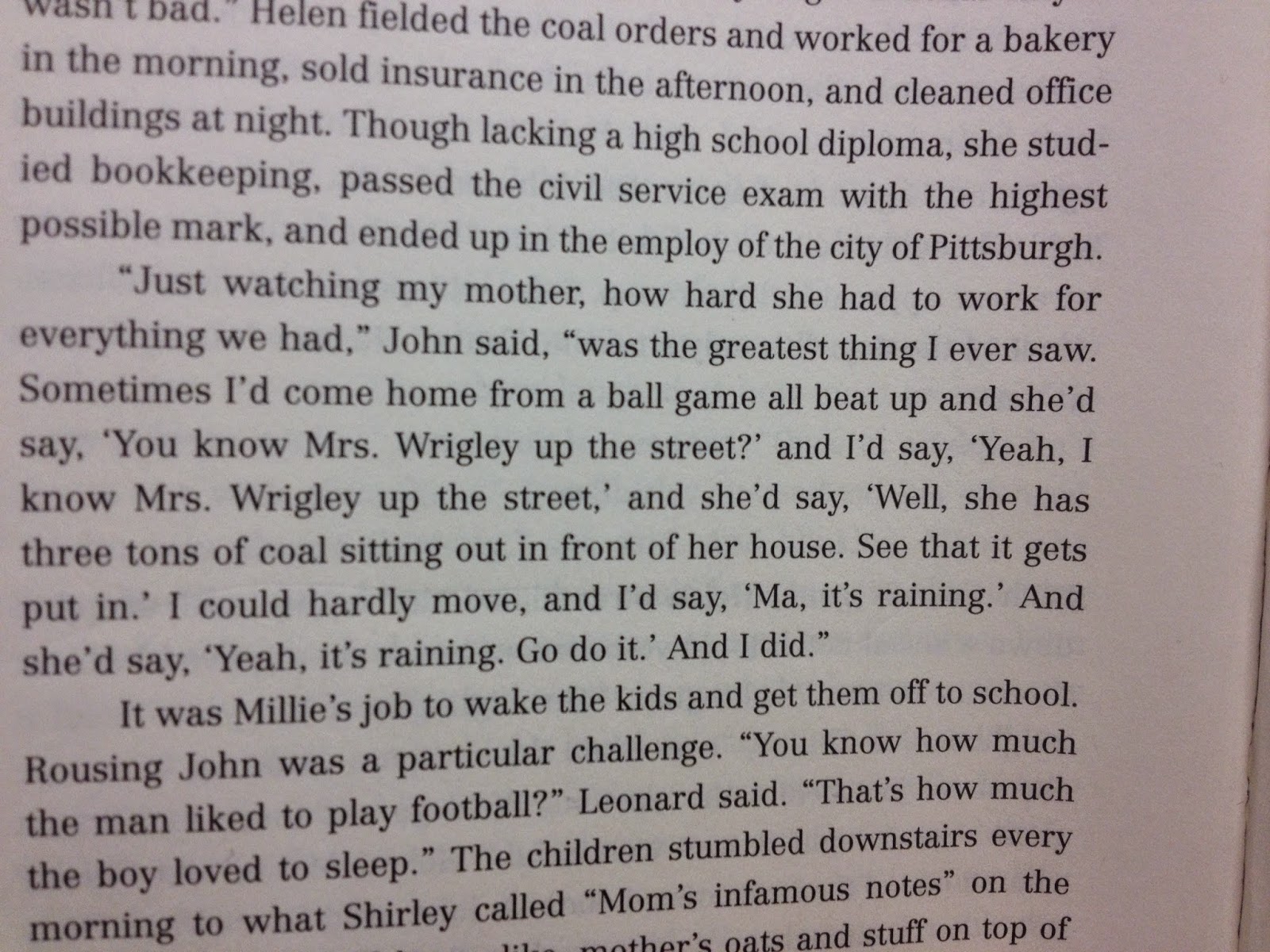 And movies? Some of the best stuff to fire you up. Rocky and the Rambo
movies. All of us in 1976 watched Rocky and started shadow boxing and
going for runs. Stallone has a knack for knowing what buttons to push when it comes to motivation.

So, there you have it. Some stuff that I use and have used to get fired up to train. My advice? Find what touches you deep inside, what lights that fire. Find what gets you in a rage to train, and use it.