This is a column from 2012. I made some changes, and I will probably continue to add /subtract rules as time goes on. 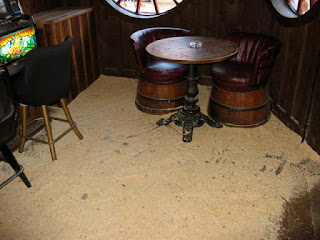 2. Chalk must be used

5. No backpacks unless they are camo and have a canteen

8. No false chatter, no cheering of any sort

9.  No cell phone use. Cell phones go into a basket the front door.

10. No clapping, No celebrating of any kind. The less words the better.

13. No phones except the payphone on the wall

15. Maryland flag must be prominently displayed

16. No water bottles. Absolutely none. Drink from the sink.

17. Only beers above 5.2% allowed , official beer is the one Cristi and I drank in NC- Double dog Flying something. It was like 11%. Vodka or Maryland Moonshine or George Dickel is preferred .

18. Only Mason Jars to drink from.

19. Sawdust on the bar floor

20. Jukebox in the corner

21. Arm wrestling station in the corner. Fights are allowed but only in the field out back. No kicking, because Johnny B says only girls kick in his neighborhood. So girls are allowed to kick, I guess.

22. Dogs are allowed and encouraged in the gym and bar area. Big dogs only, Nothing less than fifty pounds.

26. Six month trial for all new members, gym members must vote unanimously on the new member

27. Certain folks are grandfathered in- Randy White and any old Baltimore Colts