A Trip To Remember


" It concerns me that your idea of freedom is being able to walk outside and piss wherever you want." - my friend Larry to me the other day.


I definitely grew up in the suburbs, outside of Washington, DC, and about 20 miles from Baltimore, Maryland, but I was fortunate enough to have access to at least a hundred acres of woods behind my house. Within these woods was a natural trout steam, and this stream also contained bluegill, suckers, snapping turtles, and various types of snakes. Also the woods contained deer, raccoon, fox, etc. I spent many days down there swimming and fishing, and I did all of my running for football in both high school and college in those woods, performing a cross-country/sprinting/hill training all in each session.

And in the summer my family and I went to Ocean City, Maryland and fished for flounder.

When I entered college, I got hooked on bass fishing in North Carolina and grew to love it.  In the summertime,  back home in Maryland, I would fish everyday, waking up at 3:30 AM and pounding coffee before heading to farm ponds or reservoirs.

I came into hunting later in life, in college.  I started when I bought my first Labrador Retriever, but it is easily my favorite activity. A perfect day would be to wake up before sunrise, perform some squats and then go duck hunting with my Labs.

Growing up doing all of these activities, I just learned how to do stuff: How to bait a hook,  what bait to use for each species of fish, where to cross a creek at the right place,  how to chop wood,  build a garden, navigate trails. I thought that everyone knew how to do those things, and I was just lucky to have my father teach me about these things, and to recognize the importance of the outdoors in a boy's life.

Now I live in the suburbs again, and I am far away from any woods that are worth a damn. Here ponds and lakes are filled with litter and pollution and there are too many people around,  irritating me. I bolt to my buddy Steve's farm in Maryland whenever I can. Those brief respites save me from serious depression brought on by too many people and pollution. That kind of stuff changes you,  and I get angry at the closeness of everything.

Given my citified life now, when I was given the opportunity to take my seven year old son to a cabin on the Eastern Shore of Maryland a few weeks ago, I jumped at the chance. I firmly believe that a kid should be well rounded; well read but should know how to handle himself in the outdoors.

The cabin is owned by my sister's boyfriend and he told my sister that I was welcome to go down there anytime that I wanted. He didn't have to say it twice. I have always loved that part of Maryland. It is different there, with the wildlife and the farms and the the creeks and rivers.

So James and I took off early one morning and in a few hours, we arrived.

To get to the cabin, you must open two locked gates and drive down a narrow dirt road. When we first drove in, I noticed a small pond sitting on the left. Being a duck hunter, I always look for birds when I see a body of water. I am guessing that six or seven wood ducks flew out of the small body of water as we drove by. My heart raced. This cabin turned out to be a paradise for us. It sits on 22 acres of woods with a river flowing out in front of it, literally 20 yards from the front porch.  The cabin was a huge man cave complete with bones of animals prominently displayed, and antlers and plastic snakes and whiskey bottles on the shelves. It had one bedroom upstairs , and had a small kitchen and living room and a screened in porch downstairs. There were pines surrounding it, and the ground was covered with pine needles.

We walked to the river and started to fish immediately. I had stopped at The new Cabelas in Delaware on our way and bought night crawlers. We went to the river and it was high tide. I swear, for a solid hour, we either got a bite or caught a fish on every cast. Now that is the way to get a kid to love fishing. The fish were bluegill and had some fight to them and I believe that one was around a pound or so. It was so damn perfect, catching fish and watching the wildlife and literally not seeing one other person for hours.

After some retrieving work with the dogs, we drove around 20 minutes to a seafood restaurant that sat right on the Choptank River. This place had an amazing view, with boats on the docks and a truly scenic river. Maryland crabs were selling for 55 dollars for 12 mediums, so I passed and settled on the soft shell crabs. James thought that he wanted them also, but when he took a bite, they were definitely not his cup of tea. I don't think that he knew that you had to eat the whole crab. The crab's eyes where staring up at him and he was a little freaked out, I think.

Back at the cabin, it was now dark and James and the dogs and I sat on the front porch and listened to the geese, herons, ducks and crickets. We couldn't hear a car or truck or another person talking.

The next day, I woke up and did 200 kettle bell swings in the yard. I had to get those in or I wouldn't be able to enjoy the day. And then we made a trip to a Walmart about 20 miles away to buy a new rod for James before we went to the river. Nothing was biting. We then went to a lake to fish. We literally had about a 20 acre lake all to ourselves. This place was unreal, a crystal clear quarry with white sand beaches. James caught his first bass, and by this time he was learning how to bait a hook and cast without getting tangled in a tree. 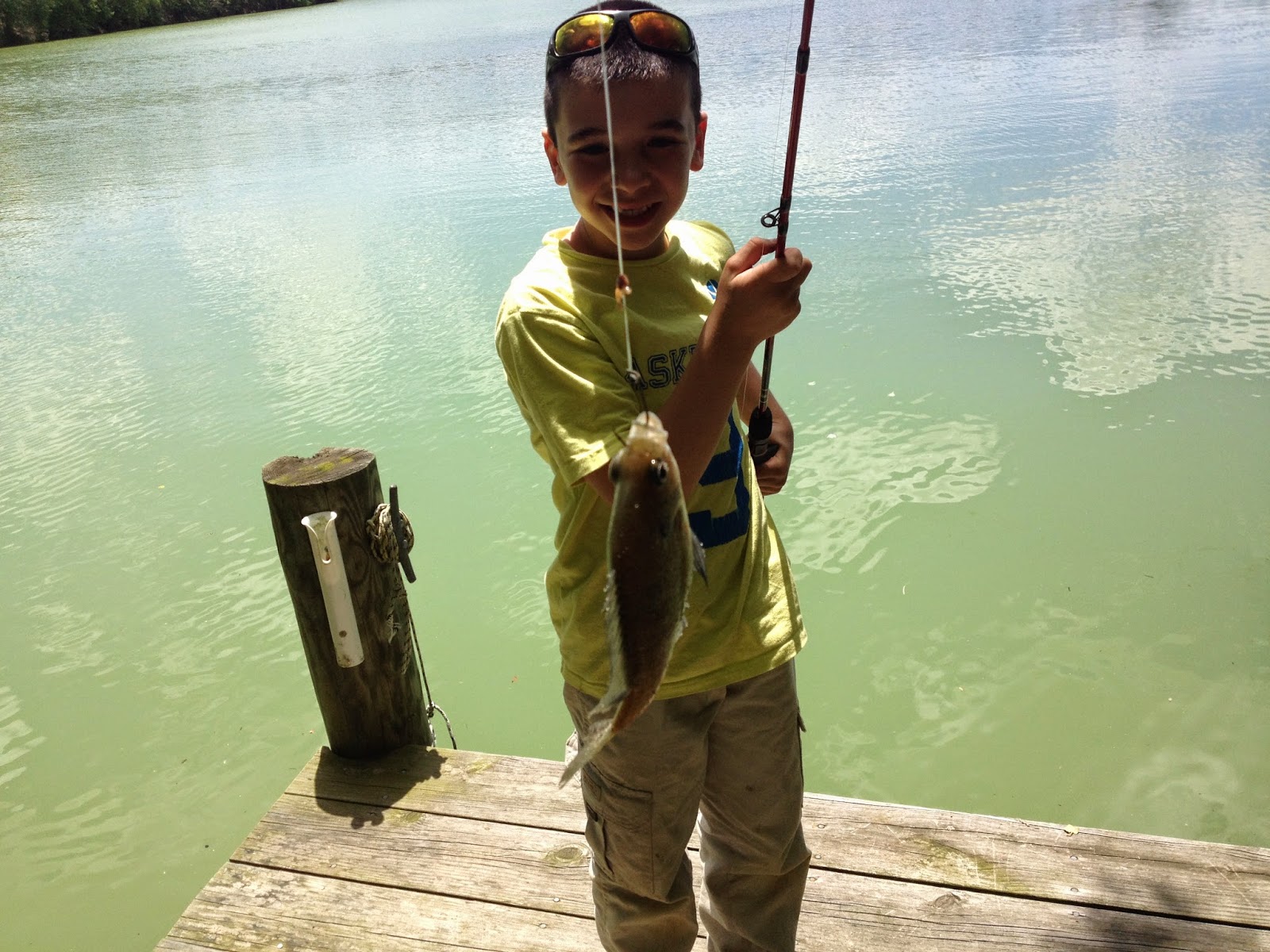 We had so much fun, just being outside. Not seeing anyone else, no traffic, no worries. To see my son get so excited when he saw that bobber start to go under the surface was priceless. And I was getting as excited as he was every time that it happened.

I did a few more swings when we got back to the cabin, and then we trained the dogs, and I was shooting the shotgun as we did some retrieving drills. You can not do that in the suburbs, for sure.

As night fell we drove to the closest town and had a steak and some fries.

The next morning we woke up early.  A few retrieves with the dogs and we were off. I had to get back to Philly for work. We both hated to leave. It was truly a magical few days for us.

These type of trips are important, I think. It is fine to have the suburbs , the city, and Little League. But just as important is to start a connection with the the outdoors,  to begin learning the skills to pass on to your kids from generation to generation. With everyone panicking about the absence of "real men" and the drugging of our kids and the video games and all of that stuff, maybe one of the answers to their well being is to get outside and learn the ways of the woods and water.
Posted by James Steel at 12:43 PM