My So Called Diet

By Cristi Bartlett
Me? On a diet? Wait, what?
But Cristi, you love cookies and vodka in large amounts?
Yes, this is all true, but I’ve decided to change it up and lessen the mass quantities of cookies and vodka that I consume on a weekly basis.
I don’t know what sparked this diet action but, I’m riding this wave, and I’m riding it till it crashes.
And this is how it all began.
Steel once said to me upon me asking about dieting “embrace hunger.” So I took that and ran with it. I learned to only eat when I was hungry.

I’ve always been somewhat of a “clean eater” (besides the vodka and cookies), so when I did eat, it was some type of animal, a veggie of some sort, or eggs.  These were staples in my diet. But I found myself eating just to eat because it was clean, that’s the way I justified it; regardless of whether or not I was hungry, if it was clean eating, I could eat nonstop. So very greedy; thus learning to embrace hunger was a bit of a change up.

Breakfast is now skipped, it is no longer the most important meal of the day, I load up on coffee instead.  This alone is awesome, because it seems the caffeine hits me 100x harder on an empty stomach.  I am much more alert and my rowdy levels are just busting through the roof.

Since I started skipping breakfast and my lifting time being in the AM, I started training fasted.  That was a major adjustment. It more so was affecting my mental than anything, I was so used to hearing you can’t train on an empty stomach, your workout won’t be effective, you’ll die if you train fasted.  You know, whatever, I think it’s all crap.  The body adapts, you can train any way you want.

After my workout, Ill consume some sort of protein shake. And possibly a few hours later, I may eat something green with an animal to accompany it, just depends on the day, or if I’m hungry.

The joys of “my diet” lie in the nite.  Long hours at work, supplemented with little food and coffee mixed with heavy cream, does not make for an exciting eating day.  But who cares, because when I get home, I eat like a savage.  And by savage I mean, a rowdy 190lb carnivorous monster. Its sacrifice-reward.  I know if I get through my work day the way I plan to, there are unlimited amounts of joy awaiting me in the form of meat. There is extreme satisfaction in eating loads upon loads of meat at the end of the day. It’s absolutely wonderful. 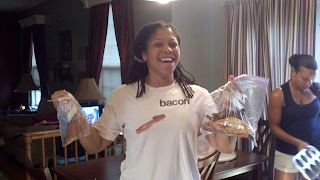 Meat in a bag!

As far as the cookies and vodka go, to be completely honest, I don’t want it. I don’t crave it.  The only thing I crave is white rice and more meat.

So my adventure in this dieting journey has been pretty good thus far.  I am down about 12lbs and I feel great.  My training is going well and I’m getting acquainted with so many different types of meats.  I think that I’ve had success with this “diet” because I feel absolutely no pressure.  There is a goal in mind, but I don’t dwell on it.  I don’t find myself fixated on the diet itself.  If I am hungry, I’ll eat, if I’m not hungry you can probably catch me chewing gum or sucking down coffee. I try not to over complicate things so I keep it simple by following MY little rules:


·         Eat large quanities of spinach and other wonderful veggies


Bottomline, this “so called diet” is something I can stick to for a while and not get burned out on.  I feel good, my performance is not decreasing, and my weight is on its way down. I don’t know how many calories I am getting, or my macro-nutrient profile for the day; in my mind that doesn’t really matter, so long as I am extra rowdy and I see some changes happening, I’m as happy as a clam.  Some may disagree with the inner workings of my diet, but so what, you don’t have to do it.  My point is, experiment, change things up if it’s not working and keep it moving.


Meat for Life.
Cristi Bartlett is an Assistant Sports Performance Coach at the University of Pennsylvania. She can be see on Manster74 on youtube lifting "rowdy" weights that "give the people what they want!"
Posted by James Steel at 2:17 PM