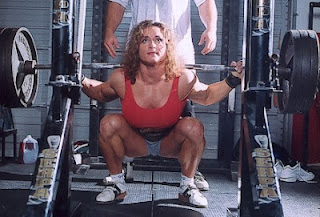 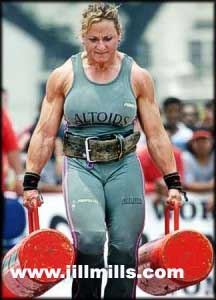 Jill Mills= Not Scared
I am in the process of attending a 3 day seminar , FMS( Functional Movement Screening) and I have to admit, its pretty good stuff. I was expecting some bosu ball stuff while standing on one leg and sipping a latte, but its not like that at all. It is basically identifying a weakness and then correcting it with mobility work or stability work. You know what the best part is about the seminar? Everyone thinks that "functional " is about the bosu ball/single leg/ water bottle /new age/ never lift heavy /never deadlift/ never do strongman stuff/ lifting is only for football players/ and it isn't!

And guess what? The very first day, the instructor crushed the idea of performing ab exercises by themselves and also spoke of the fact that a "6 pack" means nothing and that if you had to have one, download the app by "The Situation" and do all the abs that you want. I LOVE IT.

And guess what else? The deadlift is actually one of the base exercises that you perform and the squat, no, the deep squat is one of the Functional Movement tests. How about them apples? In fact, he mentions Westside Barbell, he talks about squatting, and deadlift is mentioned a lot.

And one of the power point slides was actually about why STRENGTH is so important.

And he talked about how all the speed and agility work in the world won't help a damn thing if you have a shoulder weakness(or any weakness) that needs to be addressed first. He told a horror story about that type of situation, where the father of a young athlete wanted speed and agility even though his movement test indicated an injured shoulder.  The father was told repeatedly that it must be handled first.  He left the one gym and found another where they would work on speed and agility at the expense of the injured shoulder. The kid ended up injuring the shoulder and having shoulder surgery and never played baseball again.

So now, where do all the people go to satisfy their need for functional mumbo jumbo that really doesn't exist except in their minds?

Not sure. But it ain't FMS, they believe in the right stuff.

I am constantly amazed and perplexed by the catch words thrown around in the world of strength and conditioning. Here are a few of the classic myths that refuse to die( All of them can be disproven by SCIENCE not conjecture..And in the end, science is what matters, not what the internet of nonothingatall tells someone):

Also, I was on a podcast the other night with Jamie Lewis and Paul Carter, Jamie of Chaos and Pain and Paul of LiftRunBang. The podcast was a blast. Those guys are smart and funny and strong. Both of them have had recent posts on diet that were super and spot on. In the podcast, there was a lot of training talk and joking and lots of jokes that I was afraid to laugh at, but it was all in good fun. Read their stuff, its very good.