I am sitting here thinking of who inspired me to start training with weights.

I know that my friend in seventh grade brought me a Muscle Mag International with Mike Mentzer on the cover and it had Rocky Deferro training arms in there. He was training his butt off with an old ratty t-shirt on at World Gym in Santa Monica. Here are two of the pics below: 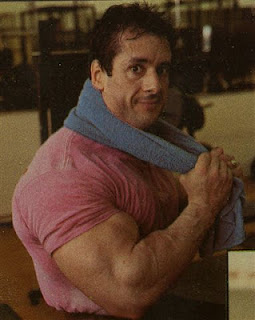 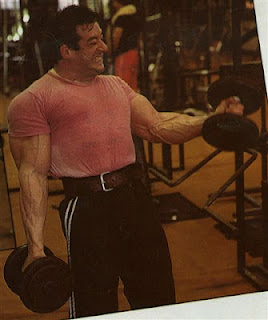 And I was so into football and the training side of it so Randy White  with the Cowboys and Mike Webster and Steve Courson with the Steelers inspired the heck out of me. All of the Steeler linemen did with their taped up jerseys and huge arms. There was zero information on how those guys trained. I ran into a guy once in Ocean City, Maryland while I was at a gym there, and he told me that he lifted with Webster in the basement of some bar. I was like, yeah right. Later, I found out that Webster did train in the basement of a bar. Go figure. 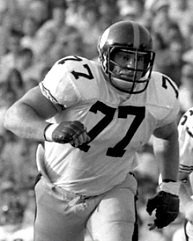 And back then, strength coaching was in its infancy,so  there was such a mystery about it. No internet, no youtube, just talking to folks, visiting folks, reading. And the magazines were always there. You waited each month for the new issues to come out. I remember how much I like Ricky Wayne's style of writing in Muscle and Fitness, and how he pulled no punches. I used to have my dad drive me to Dynamo Gym and Scuba in College Park, Maryland so that I could run upstairs to the tiny store above the gym and buy the latest mags each month.

Powerlifting? Nobody I knew was into it at all. I remember the first time that I read about Kaz, I was like, really? 600 pound bench press? And in my buddy Rick's basement, there was Kaz's workout booklets, which were these pamphlets that had his training secrets in them. I would love to have them now. 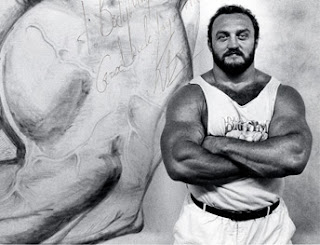 The Barbarian Brothers were huge with me. I actually saw them in seminar when they were filming the movie , DC Cab back in the 80's. When I went to buy tickets at the Wheaton, Maryland Gold's Gym, David Paul(one of the brothers) , was doing rack deadlifts with like 585 and wearing jeans and suspenders and some big hooded shirt. That was badass to see. They were funny and huge and they told the truth about everything. They were pretty strong, lots of cheating , but strong-150lb cheat DB curls, 315 lb barbell curls, 500 pound bench press with a reverse grip. Very cool for me to see. I remember that they signed a picture for me and spelled "barbarian" wrong.They spelled it "barbrian". Funny. And they had two ladies with them who were getting all pissed off if people weren't buying 8x10 glossies and were instead having the twins sign the free posters that were given out. I collected everything that I could get my hand on about those guys. We all did behind the neck presses also, and none of us had any shoulder problems. They also brought out a bosu ball during the seminar and squatted 95 pounds while drinking from a triple ionized water bottle and working their core. Just kidding, that would have been weak. No , they did just the basic stuff.

The Barbarians
I saw Mike Mentzer lift one time. He was in the Maryland University Football weight room back when I was in like 9th grade- I guess that was around 1981? He was vascular and thick as hell. Very nice to me also. I remember him being encouraged by the players as he was doing behind the neck presses. I tried his training for awhile. I didn't get much out of it, to me it just wasn't enough volume.

I was into Tom Platz. I attended one of his seminars in the 80's in Maryland.  His legs were amazing. He told us all the drugs that he took, which wasn't much at all. His legs were, I am not sure how to describe them. They were like something from outer space, like they couldn't belong on a human. I was in the front row for that seminar and it was a few years after he tore his biceps. He was posing and he was saying how you couldn't really tell that it was torn, and some guy came up to him and pointed to Tom's biceps and said, yeah you can, you can see that it is torn right there. Which wasn't very nice of him at all.

And as I got older, the Bulgarian Training Hall tapes were a huge source for me to go to, those just blew my mind, and of course Kirk and Coan when I got into powerlifting.

Those are just some of the folks that always got me fired up to train. I gravitated to them because they trained so damn hard and looked the part also. They weren't all sloppy looking and they did the basic stuff, just like my friends and I did. It set the course for a life long obsession with the weights for me.
Posted by James Steel at 1:49 PM