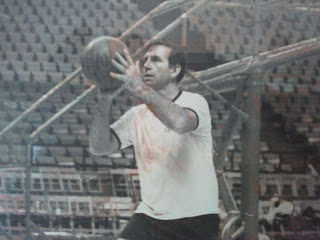 I am glad for my father, Dr. Donald Steel, for all the things that he has taught me. He is a better man than I will ever be. He is the best man that I have ever known and also the smartest. His birthday is in a few days, and I am thinking about him.

He does not go in for small talk. He is a man who gets right to the point, enjoys a good story and tells a good story. He loves Seinfeld and Curb Your Enthusiasm and appreciates a good sense of humor.

He is beyond tough, can barely walk or stand upright because of all of his injuries but he exercises almost daily and wills himself to do the things that he wants to do, because what is the other alternative?

He decided long ago that what was important to him was family, competing in sports and teaching and he focused on those three things for many years. Once you know that stuff , you can go full force in that direction.

He does not drink, smoke or cuss. He isn't religious, he just feels like that stuff is ignorant and unnecessary and that is that.

He doesn't listen to music, he could not tell you who Lady Gaga is and if  he saw her on TV he would laugh out loud. Dad listens to sports radio exclusively.

No computer, no email, no cell phone. Silly stuff, and why would you need it? Talk to someone, look at someone. And if it's that important, they will get in touch with you.

I am thinking of him because yesterday my friend Stephen and I worked outside for like eight hours demolishing a shed and it was long, hot , brutal work. I love that type of work. We used sledgehammers and axes and worked and worked. And midway through the day, I thought how  glad  I was that my father had taught me how to swing a sledge and wield an axe when I was younger. I would come home from junior high and high school and he would have wood for me to split or dirt for me to move, tons of it to shovel and wheelbarrow down the hill and into the backyard. And I learned to love that feeling, of sweating in the Maryland heat and finishing and having him come home from work at dusk and saying good job, Jimmy. Damn, I love that man. Just that little bit of praise meant so much to me.

He is in the Hall of Fame at the College of New Jersey for football, basketball, and baseball and has his doctorate from LSU and taught at the University of Maryland for something like 40 years. He was a near perfect student in college.

Sports were so big in my household growing up. I went to every single University of Maryland football game and most of the basketball games too. Dad still plays tennis four times a week and walks on the treadmill a few times a week also.

He has always hated folks who brought attention to themselves, who danced in the end zone or bragged or acted like an ass when they made a tackle. Its tough for him to watch sports now, with all of the celebrations, but he tries to hang in there. The chest thumping and dancing is silly to him, grown men acting like that, just embarrassing.

His favorite player was and always will be Johnny Unitas. The best ever.

He is 79 now and when I spoke to him this morning, he was going outside to finish planting flowers. He loves his garden. This year, he planted 3600 flowers. Yes, 3600. With an artificial hip and knee to boot.

He doesn't care if you get him anything for his birthday or Christmas, because he is your father and he is supposed to get you stuff, not the other way around.

My father has worked so hard for so long that he does not know another way. He loaded boxcars to work his way through college. His parents never finished high school or even middle school, so back then, you worked. You worked to get the things that you wanted, that you needed. College was a luxury in the 1950's.

He has made it tough for me to be around other men, very tough.  I see their weaknesses so fast. I constantly compare them to my father and it eats me up the way they act, with their silliness and egos and what they think is important in life. Men who think that they are better than someone else because of their position at a workplace or because of their money that they have or status in society. None of that matters to him, none of it at all.

When he comes to visit me in New Jersey, to see his grandchildren, many times he doesn't even come into the house. Who wants to sit in the house on a beautiful day like this day?  He sits in the front yard, he plays catch with my sons, he plays run as fast as you can to the tree with them. After an hour or so, he hands me a twenty dollar bill and tells me to go get hoagies for everyone and that he will have a turkey hoagie with veggies and mustard and no cheese. It's the "Grandpa Hoagie" , as my son James calls it. Then after a few more hours, he says, well, gotta beat the traffic on 95, and he heads on out. Sometimes we hug, but usually we don't, and I could care less,  he tells me he loves me and shows me and that is enough.

When we go to the beach, he grabs a chair and and umbrella and that is it. Nothing else. No need to make a big deal about it. Just go. I don't believe that I have ever seen him pack for anything, though I am sure that he has, probably a small bag or something. If he needed it bad enough, he could always get it wherever he was going. There is never anything extra, nothing materialistic, nothing taking a long time to get ready about. Grab your racquet and your car keys and go.

I have never seen him wear jewelry, in fact, I just laughed out loud when I thought of him wearing a necklace. How about an earring? That would be hilarious.

He is the last of the best, the generation that knew the Great Depression, that knew WWII and knew that you better save because what comes tomorrow may be rough and you have a family to support. The generation that knew that it's not about YOU at all, its about responsibility and caring and taking care of the ones that you love. All this talk about how to be a man or what makes a man would be funny to him, if he was aware that it was going on. What makes a man? Silliness. You are a man or you aren't a man. If you have to question it, you probably aren't one. And just talking about it so much would be absurd to him. Just go do something, he would say.

I could go on all day about my Dad, but I won't. Its enough to write these few things about him. I have barely scraped the surface, but a lot of the stuff that he has taught me had to be experienced. Just being around him, watching him, listening to him has made me a better person.

I talk to him everyday, sometimes twice a day, attempting to glean anything from him that I haven't learned yet.