Dave Lutz is an online client of mine.  When he sent me a video of him training, I noticed that the gym had a bare bones, no frills atmosphere, just the kind of gym that I like.  He mentioned to me that the owner had a unique story; a lifetime in the iron game.  He wrote this story to introduce Bas' Barbell's readership to this very unique individual. 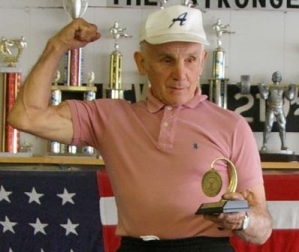 I come from a small town in the corner of Northeastern Pennsylvania named Dunmore, which is right next to the city of Scranton. Most people are probably familiar with Scranton nowadays simply because it’s the city in which the hit NBC show, The Office, takes place. The likes of you who train and are involved in the iron world may know of Scranton as the hometown of legendary powerlifters “Big” Jim Williams, who was more known in Scranton by his nickname “Chimsey” (pronounced chime-see), and John Kuc (who is actually from a town about 20-25 miles south of Scranton). They trained in the local YMCA in Dunmore where I first learned to lift a few years ago, decades before I picked up a barbell. Both were incredible lifters and many stories are still told to this day by some of the older guys that were lucky enough to be able to train with them.

Aside from some very strong powerlifters, Scranton, more specifically, Dunmore has a legend from the Olympic Weightlifting spectrum of the iron game: “King” Joe Amendolaro. King Joe was born in 1928, he just turned 84 in March and he still trains daily. Joe was always active growing up and told us he was “always good at push-ups, lots of push-ups, sit-ups, pull-ups, etc.” When Joe first joined the Army, a Sargent ordered him and another recruit to do push-ups till they couldn’t anymore. The other recruit just about passed out at 75, but not Joe, he did 202 in one shot. He joined the Army during the Korean War, but only made it as far as Alaska. This duty station would have one of the biggest impacts on Joe’s life. It was in Alaska in 1954 where Joe was first introduced to two of his loves: Olympic Weightlifting and Cross Country Skiing. He’s been doing both ever since.
Joe was lifting weights while stationed there but had never done any of the Olympic movements. One day a fellow solider mentioned to him that they were having an Olympic Weightlifting meet down in Anchorage. Joe not even knowing what Olympic lifting was agreed to go down with his friend and compete. Joe learned the clean and press, clean and jerk, and the snatch that day and competed in the meet. He ended up taking first place in his weight class. 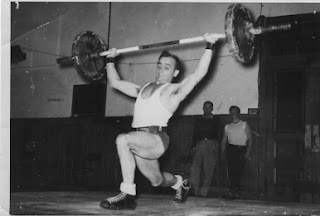 Since then Joe has competed both nationally and internationally in both sports. He competed in a 52 mile cross country skiing race in Sweden at age 51 and describes the distance as “skiing from Scranton to New Jersey”. At the rest stations along the course, they gave the skiers a blueberry and honey soup. When Joe returned back home after the race, he bought and planted a big blueberry bush and now has 100s of them on his property and invites anyone to come and pick them every year.  He also currently maintains his very own cross country trails on his land in the outskirts of Dunmore that he skis every winter. He has about 14 miles of trails. 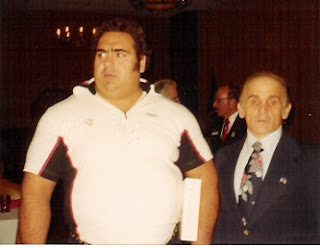 He also competed in and attended many Olympic lifting meets. He was friends with Bob Hoffman, attended meets at York Barbell and lifted there too a few times. Joe has a picture of himself with Bob Hoffman outside Joe’s old gym in Dunmore back in the 1960s (Tony was unable to get it to me to scan, but if he does I’ll have Jim post it). He’s met many of the famous American lifters from that era such as Phil Grippaldi, Bob Bednarski, etc. He even met Vasily Alexeev at a meet he attended but did not lift in. He brought Alexeev a box of pizza from a local Scranton pizza parlor as a gift. We have some actual competition signs from meets with these lifters names hanging in our club which bears Joe’s name: King Joe’s Barbell Club (www.kingjoesbarbellclub.com). 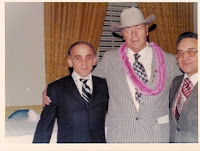 Joe with Bob Hoffman on his birthday.

Joe remembers the days when Americans were competitive in Olympic lifting and actually won Olympic meets. He thinks the current state of USA Weightlifting is sad and agrees our lifters just aren’t strong and don’t train right. His current opinion is that we’ll never beat the Russians or Chinese if we keep doing things the way we are now. Anyone with an interest in the history of the sport would enjoy talking to Joe for hours about the heyday of Olympic Weightlifting in the US. 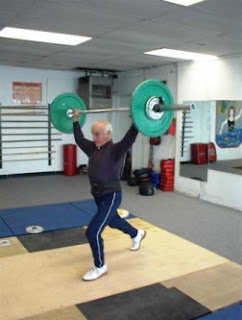 Joe is of smaller stature, standing around 5’4” inches tall and weighing around 130lbs. He’s always competed at 132lbs. Two years ago at age 82, he snatched 132lbs, a body weight snatch, and clean and jerked 170lbs in competition. 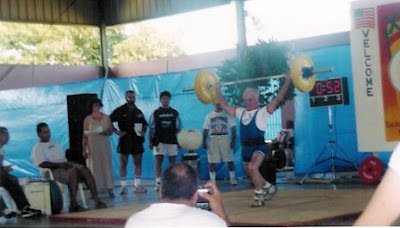 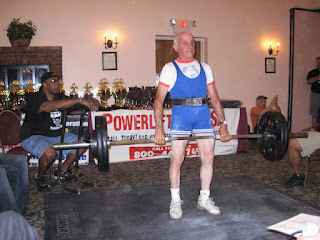 Currently, at 84 years old, he can still press around body weight, about 128-130lbs, and has deadlifted 300lbs with a double overhand grip in the gym. He’s still currently the WNPF Men’s Masters 80-84 age group raw national deadlift record holder with a pull of 260lbs, set a couple years before his 300lbs gym pull. I’d also like to note that all of his pulls from the floor presently…deads, cleans, snatches are currently done with a thumbless double overhand grip. This is because Joe can no longer wrap his thumb around the bar and lift the weight. Old age and a long life of training take its toll.

Joe admits he was never much of a squatter, telling me he wishes he squatted more. He does body weight squats as best as he can now, but he can’t go too deep because he’s had a knee replacement. He’s quick to tell anyone though they should be squatting, pressing, cleaning, and snatching. He always cleaned and snatched using the split style until the knee replacement. Now he does the power versions. He believes all athletes should learn how to split snatch, and calls the bench press a “sissy” exercise because he feels too many do the bench press and nothing else, and that too many people get hurt bench pressing. He particularly hates geared bench pressing (and squat suits too), saying “Who gets the medal, you or that ridiculous shirt?" He really does think it’s a fine lift that has its place in training, when done raw, but that people should spend more time doing the Olympic Lifts, pressing overhead, and squatting instead. 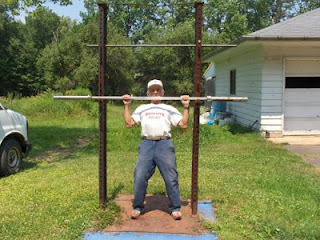 Joe is always more than willing to teach anyone the Olympic Lifts. He would love to see more and more kids getting into Olympic Weightlifting. All one has to do is call him and he’ll set up a time and date to meet you at the gym. Every spring he trains the Dunmore High School football team on how to do the Olympic lifts during their 6:00 AM morning workouts. Dunmore has a pretty good team every year, and Joe is convinced the split snatches make the difference, since no other schools in the area have their athletes perform split snatches. Joe's favorite saying is, "If you wear out your body, where are you gonna live?" He’s lived by that motto for over 80 years.
Some of Joe’s other feats of strength from over the years:
·       One arm chin-up done from a dead hang.
·       Carrying two 5-gallon jugs of water at a time while delivering water with his son, Tony, up and down stairs in both summer and winter, well into his late 70s/early 80s. He would then train the lifts after working all day.
·       Hanging from a ledge by his toes/tips of his shoes and then getting back up without assistance from someone else. The ledge was 30-40 feet above ground. Joe has a picture of him hanging. He did this in the Army on a dare. If he can find it, I’ll scan it in and send it to Jim.

Joe is an inspiration to us all that despite age, we can all still train and achieve what may seem impossible or unlikely. I’m proud to know this local legend and call him a friend. 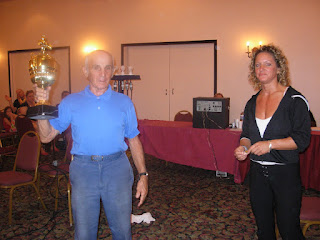