The Force of Intensity 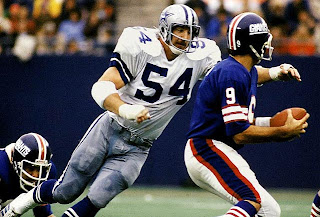 Intensity is something that you can sometimes feel. I have been around some folks like that before, folks who reeked of intensity. My buddy Chris who had a 610x3 ass to grass squat and legit 485 bench in junior college was a freaking insane nut when he trained. He'd focus on someone in the gym and pretend the person was messing with him or talking about him and tell me that he was gonna kill the guy. He was just gearing himself up. The guy in question had no idea what was going on, he was just talking to the front desk guy. Chris didnt yell or scream, he just boiled inside.

When I was a coach at Gardner webb University in the 90's, pro scouts where always coming through. We had some athletes there. One year we had a big defensive end who ended up playing a few years in the NFL. Intensity was not his strong suit. I was always on him to go harder, to pick up his play. When the Dallas Cowboys came around to look at him, I sat down with the coach and picked his brain on the current and former Cowboys. Now what I really was doing was waiting on a Randy White story from the coach. I was and always will be a huge Randy white fan. He was so dedicated and hardcore that he just crushed people on the field, ran them over, demoralized opponents. Even when he got beat, he fought. He had 147 tackles and 16 sacks one year in the NFL. And he benched 500 and cleaned 400 and was just a dedicated country boy who didnt need to dance or get publicity. He did his job and that was that. He would stop off for a beer after practice, not go get fitted for clothes.

So I am sitting there with the Dallas Cowboys coach and I bring up Randy White and the coach says, "RANDY WHITE?? That's a whole different ballgame!" I was thinking, oh man, I am going to hear something bad about my idol. So I ask him just what he means and the coach says," Randy is a great guy and all , but he is the most competive person I have ever seen. We played raquetball one day and I started to beat him and he just about killed me." We both laughed and I asked, "How does our kid here, compare to Randy White?" The coach started laughing. He said, "Your boy? Let me tell you somethin, if he and Randy White went into a room to fight, Randy White would walk out of there in 30 seconds." Again he said, "That's a whole different ballgame!"

You get around some of these folks and the intensity rubs off on everyone, if they have any "want to" in them. If they don't, they stand back in awe at the energy.  Its an awesome thing, really. And when you get around it, the force of intensity, you never forget it.
Posted by James Steel at 8:56 PM