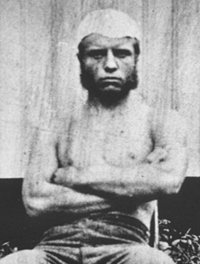 I just finished the book, The River of Doubt, by Candice Millard. I believe that it is the best non-fiction book that I have ever read. It is a book about Theodore Roosevelt's journey down an isolated, undiscovered by- the- outside- world river in the Amazon in the early 1900's.

Roosevelt was an amazing man, and was beyond tough and brave. He almost died on the river, sick with fever and infection. He persevered, never shirked a duty, never complained. In fact, he was operated on during the journey. The operation was done in the mud of a riverbank, with no anesthesia. He never cried out in pain, he didn't even whimper.

This book got me thinking about the tough people that I have known. Most of them were born in the 1930's, my fathers generation. Of course there is my dad, with his artificial hip and knee, who still plays tennis almost everyday at 78 years of age. He loaded box cars to work his way through college and his parents never finished middle school, but he eventually earned his doctorate and became a professor for 40 years.

And my Uncle George who could fix anything, who taught himself to weld, to sail, to play sports even though he wasn't a natural. He just did it. I remember watching him play sports with one hand because his shoulder was so messed up that he couldn't raise his arm above his head. When he was dying of bone cancer, and the doctor told him that there was nothing else to do for him, my Uncle George told the doctor to "Get your thinking cap on, and find a way", and the doctor came back in a few days and helped him live longer with some different treatment protocols. He was just like that, get it done, find a way.

And then I think about folks I know who think that they are tough, but really aren't. In 20 some years of coaching and being in athletics, you run into a lot of those people. Most are all bluster and macho and compared to my dad and uncle, they are hilarious. And when I am around  most grown men these days, they are usually incredibly soft whiners who are always trying to find a way to be manipulators, or stab someone in the back, or they are super materialistic. I always wonder, how do these men think? How do they they sleep at night? What is really going on in their heads?

I always feel that by noticing that in them, the fakeness, the whining, the "playing" of others, that it will make me weak also. Just being around those folks in my life has to rub off some, right? I hope not. When I get into that way of thinking, I force myself to think about the truly tough guys: the humble soldier, Teddy Roosevelt, Johnny Unitas, and my dad and uncle. And then I stifle a laugh when I am around the pseudo tough guys.
Posted by James Steel at 10:42 AM