Do you ever get the feeling that you just want to knock somebody out? Things go shitty, really shitty for a while and it builds up and builds up and you want to lash out and who is there to lash out to?  Because everybody has it bad. Whether you are rich or poor, you have it bad. You have it bad because nobody goes through life unscathed. You may be driving a fancy car one day, but the next day, you may get t-boned at a green light and would give anything to be poor but alive.

I don't have it bad, I know that. I'm not talking about me. Well, it could be, because I have had enough shitty things happen to me, but the whole thing here is that it happens to everydamnbody. I really think , and not to be depressing here, but life is a bunch of crappy moments, unbelievably crappy moments interspersed with a few, amazing, bright incredible moments. That is it. And that blows. But I am glad to be alive. And the death sentence looms over all.

Started reading Jim Harrison's nonfiction book today, The Search for the Genuine, and its very good. Lots of stuff about hunting and dogs. He makes a few political comments, but back when he wrote it, the political climate was sure different. He can write his ass off, actually. I remember why I didn't want to read him: He talked shit about Hemingway a few times. I get defensive about people that talk bad about my idols. Excellent book. 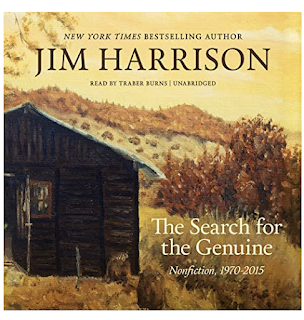 Also, Christmas is a great time of year. Mostly because its goose season , but also because I had such great Christmas' growing up, courtesy of my parents. We didn't have any money, but they made sure that my sister and I had presents and fun. And it is time for my favorite Christmas movie ever, Christmas Vacation. Classic. I make my family watch it over and over until they absolutely hate it. Christmas Story is great, also. And any Dean Martin Christmas special. Everyone smiling and smoking and drinking and a mess of scantily clad Santa's helper's. C'mon. A Dean Martin Christmas special? The best. Christmas morning is still special, like it gives me a special feeling, like the day is different. The mood is different. We have sausage biscuits and gravy for Christmas breakfast. I love that from when I lived in America, down South. I would kill for a Bojangle's country ham biscuit right now.

Did anyone see the Army vs Navy game? Hard hitting, and everyone hustles their asses off. I mean, I was impressed. Especially after watching some major college players not hustle AT ALL when they are beat. Something about being scared to be shown up, or make a mistake that may make them look foolish on social media. I hate that, but I guess that they have zero pride. And how about all those guys running out of bounds? Walter Payton must be rolling over in his grave when he sees that happen. Payton would get to the sideline and turn and attack a defender. But whatever. Doesn't matter. Money is too great, and if they get injured, they lose their zillions of dollars and they don't care about how it looks and the coaches don't say shit because if they do, the spoiled brats may not play too hard. Sad. Coaches do not run the show. Everybody knows that.

She began the conversation with a sigh. " I do not know who you are."  "I don't either, " he shrugged and smiled