I love looking at new trucks, watching videos about them, imagining that I own a new 4x4 with a big lift and big old jacked up tires. I do have a Tundra 4x4, but any true truck lover just likes to dream about getting a new one.

So I am looking at all the trucks and the high end 4x4's are pretty expensive. Some are 90,000 dollars. That is a bunch of money.

I started thinking about how expensive stuff is these days.

Little league baseball bats? Up to 1,000 dollars. We had two bats when I played, a heavy one and a light one. Everyone used them.

Basketball shoes? You can pay up to 300 dollars a pair.

Years and years ago, I came home from elementary school , and I asked my father if he would buy me some Converse Chuck Taylor's. They were the big deal in Adelphi, Maryland in the 1970's. He agreed, and we went out shopping. I could not wait to have some new Chuck's!

So we loaded into our tan station wagon and went shoe shopping. We found the shoes, but they were all around 12.99. I remember that price to this day.

This was the time when we had a gas shortage. It was so bad that there were huge lines at the pumps and my dad had to put a lock on his gas tank because people were siphoning gas out of cars at night.

So we are going from place to place, looking to beat that 12.99 price, because after the first store, my dad announced, "I will never pay 12.99 for a pair of sneakers!" 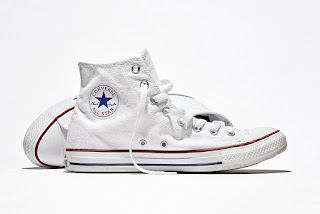 I had been wearing what my older sister's friends called "may-pops" shoes that were off brand, bought at Zayre's department store, sort of like an even lower class Walmart.

I remember sitting in the back seat of the station wagon, driving down University Boulevard in College Park, Maryland. It had those seats where you could sit in the way back and you would be facing the rear of the car. We had gone to five different places trying to beat that 12.99 price.

I remember  sitting there, looking out the back window as it was starting to get dark and thinking, we just spent 12.99 in gas driving around. But of course, I never said that to my father, just kept it to myself. I didn't get the shoes that day. But a little while later, Foot Locker opened up an outlet store, featuring shoes that had a little something wrong with them. "Irregulars" is what they were called. Maybe the logo was a little bit wrong, or they had a mark on them, or the soles were a little off. My father was in his glory. Now he could get me name brand shoes for a good price. I actually got "Dr. J's" basketball shoes from there. And nobody knew they were a little off, unless they would have looked inside the tongue and seen IRREGULAR stamped there.

I'm glad my father was like that, he knew that those prices were ridiculous even for back then. Now? Everything is ridiculous, but people keep buying, keeping up with everyone else who think that they must have this or that to be cool. So stupid.

For the price of 15 baseball bats today, I coulda bought a house in the 1950's. Think about that next time you are doling out money for what you think you must have.

And remember my father, astonished at a 12.99 price tag for a pair of canvas basketball shoes.