How about that coward Trudeau in Canada? Outlawing 1500 weapons with a pen held in his non calloused little hand? Another pussy in the world who needs to spend about 10 years chained to a power rack, squatting. And that's why we have the SECOND AMENDMENT. And you can like it or not, but why should the government be the only people with weapons? Ah, so you can be helpless against them and be ruled and have zero freedoms. Our freedom has already been compromised enough. And a motivated populous can't fight a government when that government has superior fire power? Of course they can.  Just ask the Vietcong if that works.

Remember World Gym in California where they had the outside deck for training? That's what every gym needs. Training outside is so freaking cool, it gives you some type of visceral, primal feeling. It would be great to have a squat rack between some trees like Joe Kinney, the first guy to close the number 4 gripper. He built a bar and put some big old cement plates on there and got two trees and put some hooks on the trees and there ya go, a squat rack. Every time he passed the squat rack he would do a few squats.Before breakfast. I think it was like 335 pounds. He was a little guy, too, like 170 pounds. He was getting that tonnage in, wasn't he? Going to the shed to get out the lawnmower? Get some squats in. Going to the machine shop? Five reps of squats. Pay the toll, my man. I think it's great. 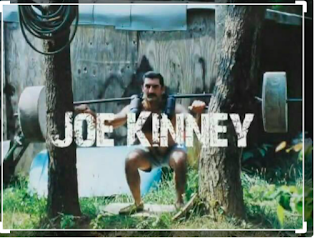 I just like when someone's out there just getting it done. No gym? No problem, I have a couple of trees and a shop to make a bar and hell, what does a gym have that Joe Kinney doesn't have? He has what he needs. I have his grip DVD around here somewhere. He could explode beer cans with his bare hands. I seen it myself.

Then he could go grab his buddy from down the mountain some and do stuff like this:

So you do a few squats as you are going back and forth to the shed or garage getting all the fishing stuff ready in the morning and then you have EARNED the right to have fun with your friend and go fishing and have some beers and build a big old fire and cook some steaks on a fire and eat them with your hands and feel satisfied that you had a great day.

All of it goes together, the lifting outside, the fishing, the fire, the camaraderie. It just appeals to me, that type of day. If you haven't done that in your life, do it. Even if it's with a kettlebell. Do 300 total swings, run up a hill or something and then shoot some skeet or hunt or fish and then build an amazing, roaring fire and toast the day. I remember when my son James was 8, we went on a fishing trip way out in the country in Maryland. I brought a 55 pound kettlebell and had to do 300 swings before we could fish every day. My son didn't "get it" at that age. He was always saying, "HURRY UP DAD! THE FISH ARE BITING!"

But you have to earn it. I love that stuff.