Bas Barbell Gym In the Front Bar in the Back Updated

I started thinking how cool it would be to have a gym and bar combo to go to.

A gym with old York weights everywhere that clang together at the top of a completed squat rep and a heavy bag in the middle of the gym, and dumbells that go up to 220 plus pounds. A gym where the music comes from an old boombox in the corner. A gym where the strongest guy picks the music and it has to be Southern Rock or Metal. A gym where you can train shirtless and barefoot and nobody gives a shit and where there isn't anyone checking social media or texting. A gym where nobody can train with their hood on or a dumb ass hat on sideways. A gym where the only phone is a pay phone in the corner. A gym with no cardio machines whatsoever. A gym with no drinks to buy, just an old rusty water fountain in one corner.  A gym with no water bottles or Yeti's allowed. A  gym with posters of Randy White, Mike Webster, Lawrence Taylor, Kirk Karwoski, Hunting Labradors, Bill Kazmaier, Tom Platz (not posing, lifting),and a huge poster that reads, WILL OVER HOPE.

And a  place where you can get done with a great training session and go through the next set of doors and see all of your buddies and have a good time. A bar where everyone feels right at home. Where the mugs are always frosty with ice dripping off of them and the bartender has an attitude and will tell you to go to hell,  but deep down inside she's a sweetheart but she does have a gun behind the mini fridge if anyone pisses her off.  One where the people police themselves. One where if you feel like punching someone in the face or getting punched in the face, everyone heads out back and the two participants put on some gloves and get it on and it's no big deal.

Some hard and fast rules for Bas Barbell's Gym and Bar

1. NO stretching allowed. In the gym or in the bar.

2. Chalk is allowed and encouraged.

3. No Velcro belts, ever. Okay, Dorian Yates is the exception.

5. No backpacks allowed unless they are camo and have a slot for a canteen, and maybe a red spot on it where people aren't sure if its blood or not.

8. No false chatter, no cheering of any sort, no high fives, no clapping, no celebrating ever, ever, ever. Here is what is am allowed:"nice job" or "hell yes" and "thats what the fuck I am talking about"

9.  Absolutely no phones allowed except for the payphone on the wall at the back of the bar. Cell phones will be smashed and set on fire out back.

10. Music is controlled by the strongest person in the gym. One rule about the music no matter how damn strong you are: No rap.

11. No tights/yoga thingies of any kind. Cut off sweat pants encouraged. No dancing anywhere on the premises.

12. No trash allowed in the spittoons. Just spit.

13. Use of the outdoor shower is on a first come first serve basis. Bring your own towel. The hose outside can also be used. Or the bucket in the well out back.

15.  United States and the Maryland flag must be prominently displayed in gym and bar.

16. No water bottles. Absolutely none. Drink from the fountain. 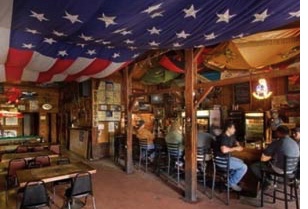 18. Mason Jars are the only glasses to drink from in the bar.

19. Budweiser and a shot of Dickel are 5 dollars everyday

20. Jukebox in the corner of the bar must play only Country, Southern Rock and Metal. Marshall Tucker, Kieth Whitley, Merle Haggard, Skynyrd and Pantera (Not Cowboys from Hell), are the main artists on there. Each play costs a quarter.

21.  Fights are allowed but only in the field out back. No kicking, because Johnny B from Southwest Philly says that only girls kick in his neighborhood. So girls are allowed to kick when they fight, I guess.

25. Guns and knives are encouraged in the gym and bar area.

26. Six month trial for all new members, gym members must vote unanimously on each new member.

28. Any military active or retired are allowed in. If you are in the military and are not 21, you can still lift here and also drink here. If you are putting your life on the line for your country, you can have a few beers.

31. No darts or knives or axes are allowed to be used while fighting.

32.  Everyone must sign the waiver so you can't sue anyone if you get your ass beat. Proper etiquette upon receiving an ass beating is to shake hands, walk back into the bar and buy your opponent a drink.