The damn city. I just drove through the city. I drove through Philadelphia, but it could be any city. Actually, Philly has a lot of character, I like that about her. But damn, if it isn't crowded. Every city is crowded. And every suburb is crowded.  People all close to you whenever you turn around. There have been times in my life when I didn't live freaking six feet from somebody and I enjoyed it. And my neighbors are fine. I just don't want neighbors unless they are acres away from me. Be a damn settler with all that acreage. Talk to folks at the bar and feed store : "Oh, I only have 500 acres, just a little ranch."

And everybody knew that you were a hearty fellow , living way out there, hunting and fishing and killing a hog and cutting a chicken's head off so we can fry that shit up and sitting outside with the Old Lady and getting ready to arm wrestle her for the last piece of chicken and the kids are off wrestling but they hear a big old coyote or maybe a wolf so they came running back to you but one of them gets caught and you have to fight off the wolf to maybe save your kid and then you save him and come back and beat the Old Lady in the best two out of three matches.

Back to the city. I know, culture, and all that, and I like plays . Stage plays.  No, I really don't. I saw Joseph and his Amazing Technicolor Raincoat or something years ago, and the audience was going nuts and I was like, what's with the raincoat? I didn't get it.  There are lots of pigeons in cities and they make great retrieving tools for retrievers.That’s a plus. But they look pretty nasty to me.

I used to go to downtown DC all of the time on field trips when I was a kid. I mean, people travel all over to see the Smithsonian Institute, but I went there on every field trip for years.  And damn, it got boring. Load up the bus! Smithsonian here we come. And everybody would groan. Yeah, yeah, some dinosaurs. I saw them last week.

I used to go down to DC to go to bodybuilding shows when I was in high school. My  parents would drop me off and leave me sometimes. But it was cool. I felt safe. It was crowded though. People everywhere.

Food! That’s it! Good food in cities. Sushi, pizza, all types of food. But if somebody said that I’d have to give up city food forever and had to exclusively eat and live in the country, I would let myself be banished from the city forever.

And you have these huge parks out there in the city and you cannot even bow hunt these things . Bunch of trails  for biking and dogs that aren't hunting dogs and all these neon colors people are wearing. And there are tons of deer everywhere spreading lyme disease and nobody can shoot them so they waste away. Roller blades and high fives. Ugh. “Hey Bro! Cooooors light after our jog?” God give me strength. I mean, stop the jogging, eat protein and go the gym, Why why? I used to jog. More like sorta run for like a mile once in a while. I jogged five miles one time and I was hungover and a little too heavy and I made it, just barely. But I was like, why ? It clears your mind. I used it for that sometimes. BUT DAMN. Lift some weights, too. Why does it have to be one or the other? Jogging makes you happy. Weight training changes your life.


I did have a girlfriend one time who had NEVER been to a city, never been on a plane, never did anything. She was just living in the woods of North Carolina with a roach clip with feathers on it hanging off her rear view mirror of her old Ford Escort and just loving life, singing Steve Miller songs over and over. But one time I had her visit me in Maryland and she flew on a plane and got a real haircut (style?) and it was like she had landed in an alien land. It was fascinating. And a little disturbing in a lot of ways.

Oh, I get away whenever I can, and more and more as I get older. You sorta cut down on the folks that you wanna be around, and getting off by yourself feels better and better. 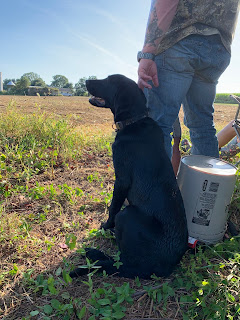 But I like the country best because of the mornings. Nobody around, sun coming up, urinating wherever I want, shooting at any hour of the day and no neighbors to complain, and fire, you must have lots of fire and whiskey and spitting into the fire and Labrador dogs all wet from the hunt, staying warm by the flame and stream rising off of their coats. Yeah, better than that play with the raincoat that I saw. That man didn't hunt or fish. I could just tell. City boy all the way.
Posted by James Steel at 7:46 PM