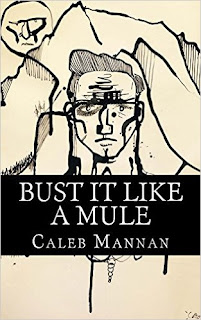 I just read the best, most unique book that I have read in a long, long time.  It is called Bust it Like A Mule, by Caleb Mannan.

I loved it so much that I was savoring every page. The author writes in a stream of consciousness dialogue that is pure literary genius. Its about a rambling man, Cotton Kingfisher, and his adventures out on his own across the country. This guy is the meanest, toughest hombre around. Well, he is only mean when provoked. And when he is provoked, look out. He will fight to the death for what he thinks is right. He is on a search for a place to settle, and in that search, he runs into all kinds of mess. He doesn't let any of it get him down, though. He just powers on through by working his tail off, fighting, drinking and generally being an all around badass. Also, I loved it because he didn't chase his ex wife around, or cry or have to see a therapist about his mom not loving him, or feel sorry for himself. I was expecting some of that type of modern stuff. When I was reading it I was thinking, uh oh, this guy is too perfect, too macho for this politically correct day and age, it is about time for the author to show Cotton's side soft side where he is weak and can't handle himself. But although he has trials, he never gets to that sensitive man that ends up realizing that the way to go is to be less of himself, of what he really is deep down inside. I don't want to give away anymore. It's the best book that I have read this year and I recommend it highly.


All of the giants are getting old, man.

I was thinking last night of Willie Nelson, and I was thinking of how bad it will be when Willie Nelson passes on.  My exact thoughts were, Merle is gone, Cash is gone, and Willie is hanging on, still getting out there . I have not been a huge fan of their music in the past, but I like what they stand for, what they represent as men. I grew up with Hank Jr. and Skynyrd, but have come into the older folks later in life. No, I do not know Willie Nelson. I have see him in concert one time, at the "Forks of the River Jam" on a farm in Tennesee in the early Nineties. It was around the time that he was in trouble with the IRS, and he had a cassette out at the time, "The IRS Tapes", and everyone, thousands and thousands of people turned out to see Willie at the concert. They turned out to support him.

I am not sure what brought me to the thoughts of Willie. He represents something to me, some type of feeling, yes, a feeling , that's it. It's that generation that represents something to me. Willie was an outlaw in a sense that he has done what he wanted to do in life, bucking the establishment in Nashville and all that to get his songs recorded. But it is more than that , for sure. I think that I really started to like Willie when I saw him years ago on the Tonight Show with Johnny Carson. He came across as the most humble guy in the world and I felt a connection to him. He is of the same generation as my father, of my late Uncle George. His hair would not have gone over big amongst most men that I grew up with, but his attitude surely does; respect for authority and for your elders, say what you feel, do what you say, be a man and lead by example.

I remember the late great Bill Starr and his love for Willie Nelson. Starr only had a few tapes , VHS tapes in his apartment, and one of them was a concert of Willie Nelson. And if Coach Starr liked him, I knew that he had to be alright.  And then today I turn on the TV and there is Willie on the 30th anniversary of Farm Aid and he is up there singing in his 80's bygod, and he started the whole thing. And he doesn't squat or deadlift, and he didn't box or play football , but I respect him nonetheless! He rises above my usual measuring sticks of being a real man by just being Willie. He has the same old guitar and the same people in his band that have been there forever. And you will never see or you will never be able to find a photo of Willie posing with his head down, looking troubled or pursing his lips or looking off into some imaginary sunset in a  dramatic pose that all the "stars" all do nowadays.  Not gonna happen.  Maybe I like all those guys (And Loretta Lynn, too) because I have a deeply rooted feeling in me that when that generation is gone, America is in trouble, even in more trouble than it is in now.

And then freaking Merle Haggard dies and I read the Rolling Stone article about Haggard and I read that when his family first moved from Oklahoma to California, the "Okies" weren't welcomed there, so instead of protesting or getting money from the government, they just went to work. Because they weren't welcome, they had to live outside of town, and Merle's dad bought a boxcar for 500.00 and the family lived in there. A box car.  They lived in a box car. And to come out of that , to deal with that everyday, not even having a real place to live for goddsake, and rising above all that, made those people strong and with that made our country strong, strengthened it's backbone. You read about those guys and that generation and the men and women are always described as stoic , and well, its time to work and we have to move the family to find work, and you can't turn to government, you gotta just keep grinding and pulling the family with you wherever it was best for them. Trying to survive. And you read how the men back then just worked themselves to death. Haggard's father dies when Merle was nine years old, and if you ever read the amazingly well written and amazingly sad Harry Crew's book, Childhood, you will remember that Crew's father died in the fields, working himself to death. In fact Crew's dad would just simply collapse in the field while working and then get up and keep working again. It is like that generation saw all of that , and remember this generation were the children of the depression, and they just thought that one had to work and you better be humble because shit could turn bad at any moment if you didn't work and stay working. Yep, that was a tough generation full of hard men and women.


I hope Willie hangs on for a while longer.