Keep Learning/ What a Book

I was talking to a friend of mine the other day, a man who has trained with weights for decades. He was coming off of an injury and hadn't been able to squat for months. So he started back slowly, performing super slow negative squats and hitting rock bottom. He was so weak that he started out with 95 pounds. And this is a 500 pound squatter when healthy. So he does the 95 pounds. Lying in bed the next morning, he feels good, so he goes out to his garage and finishes with 105 for a set of 10. He feels good, better than he has in a long while. Next day, same thing; squats, finishes with a set of 10 with 115 for 10. And so on, squats everyday. He starts to make bigger jumps, and in 10 days, gets 255x10 in super slow fashion, rock bottom.

He has been, for a very long time, a once a week squatter, and it had worked for him. Worked great for him. In fact, the man has squatted over 800 pounds.

But here is the point: you are not too old to try new methods, and you must be open to new methods. If you swear that your way is best and you close your mind off to everything else, you are really doing a disservice to you and if you train others,  a disservice to them also. He was so excited telling me about his progress, and I get it. It's motivating when you find a different way to train that works for you when maybe you thought that you had it all figured out. But he had an open mind and went with his instincts and voila! much progress.

There is no right way to train, no matter what anyone tells you. There are some basic tenets that should be followed like barbell training is more efficient, fundamentals in form should be followed, that kind of stuff. But for programs? Everyone is different and cookie cutter programs are not the most effective. Individuals respond differently to different programs. Much of it is mental. If  they believe it works, it works, even if it is absurd in it's methodology. If you go in to the gym thinking that it is bullshit, this program sucks, etc. , it ain't gonna work.

And some folks respond best to intensity and some best with volume and then the same people, a year later, may respond the opposite way.

Something that I use constantly in programming is taking into account the person's sheer toughness when programming.  So much of  all of it is mental that I have come to the conclusion that the mental aspect of training, the toughness aspect of what a person just has, is the most important attribute to own in training and in life, for that matter.  Others call it character. You can throw away the calculations regarding volume and intensity and the phases of training and what the latest guru espoused and what the meme from the coolest lifter put up on the internet.  This means that some people (very few) can handle just about anything; a stressful job, a divorce, kids, tragedy, and still make crazy gains with a tough program. These are the super motivated, never- miss- a workout- crowd that thrives on adversity.

Others let everything bother them and moan about the tough life that they have and are looking for something that can derail them because they don't want it that bad. The type who misses training because of a cold (they always say it's a sinus infection for some reason, maybe it sounds more extreme). These are the type of people who like to talk about training more than just training. They need a program that isn't too tough, maybe 3 days a week, leaving lots of room for light days and easy days and missed sessions. Or they are too busy. And why aren't they making progress? its obvious as hell. They like the idea but not the application. They will never be great. They almost get there, but not quite. They have lots of opinions and theories but they are too weak to ever get there.


I just read a book that ranks right among my favorites of all time. It is called, "PT 109: An American Epic of War, Survival, and the Destiny of John F. Kennedy.", and it is an amazing book. If you want to read a book that highlights toughness, kindness, character, survival and just plain old guts, READ THIS BOOK. 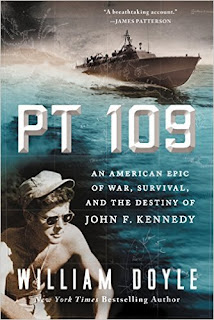 You can say what you want about JFK, his personal life, his indiscretions, but the man was a war hero, and that means a whole lot in my book. I mean , he was brave as hell and he saved lives and he never forgot the members on his team. What a book and what a man.

A quick story here: My mother was a teacher back in Maryland years ago and a young Senator from Massachusetts came and spoke to a group of she and her colleagues. She said that when he came into the room, you could sense that this guy was something special. And after his speech, the crowd was stunned at the man's words and sheer presence. My mother came home and told my father that she just heard a speech from a man who was really going to be somebody. My father asked who it was, and my mother answered, "Some Senator named John F. Kennedy."

She also was in the same room with Al Gore years later and she said that there was no comparison between the aura of JFK and Gore. Gore had zero and JFK sucked the air out of the room.
Posted by James Steel at 6:16 PM