With everyone getting so offended by every damn thing these days ( Recently, I went to my safe place when I was offended by someone calling me Sir. I felt like they were saying that I was old and I thought that was judgemental and then the girl at Barnes and Noble didn't ask If I had a membership card and I asked why? Don't I look like I can have a membership? Why, because I have camo on or I am a big guy?), I started to think back on stuff that was deemed offensive when I was a kid.

Don't talk about some one's mother. That was a huge deal and people would fight at the drop of a hat over that one. Seriously. The first time I heard "your momma" jokes in New Jersey , I looked around for someone to get their ass kicked, but people laughed. I guess folks don't love their mother's anywhere but Maryland. People were very protective of their families in general. Lots of fights over an insult about a family member. In school or after school people would gather to see a good fight. Why are they fighting? Cause Bobby said Sam's Mom was fat. Ohhhhhh!

Don't make fun of other people's religion. Actually, I think that everyone I knew was a Jesus guy of some sort except Desta. She was a tiny little girl in my elementary school classes. She was Jewish, thus she became THE expert on everything Jewish. Like if the teacher was talking about Christmas(probably not allowed to mention Christmas in school these days), and then wanted to mention Hanukkah, she would start talking about some other differences and then she would say, "Isn't that right, Desta?" and she would confirm or deny. I don't remember anyone making fun of her. I think everyone judged each other "cool" or "uncool" , which even that, would be offensive to some people. Labeling and all.

Another one:You couldn't say anything when adults were talking. Hell, you never said anything to adults but hello and goodbye unless they asked you a question. My son had this kid over the house one day and this kid was full of himself, man. And the kid is talking to me like I am another 9 year old and he's giggling and being loud and going all over the place and thenI hear my son whisper to this kid...shhhh, my Dad doesn't like silliness....The kid had no idea what that even meant, he was oblivious on how to act at someone else's house. Probably because his parents bought him everything under the sun and told him that he was a unique snowflake and all that stuff. Got a trophy and a seat at the head of the table for taking out the trash one time. So I said screw it and went for a drive. Texted my wife to let me know when that spoiled brat is gone and the kid ain't been back since. I laugh when my dad describes a typical day when I was a kid- wake up, breakfast. School. Home. Sent outside to play. Come in when mom rings the bell. Homework. Shower . Family dinner. Ignored by parents, play with sister. Bed. Or you can add practice in there most of the year.

When playing outside, you weren't allowed to yell SNAKE in the woods unless there was one, and don't get the cigarette all wet when you smoked it as a third grader (makes sixth graders furious).

Read a great book the other day, Drinking in America, by Susan Cheever. This book tells us that many of the tremendous personalities of our country and many of the major events in the USA's history were influenced by alcohol. I mean, Americans drank and drank and drank. Workers for years were paid in beer, railroads were built by Irish workers who were woken up each morning by a shotgun blast and a shot of whiskey for breakfast. We had Presidents who got smashed and politicians in general who were always wasted. It's a very fun book to read. Check it out. 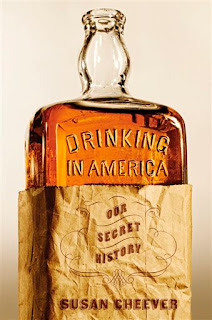 I have to laugh when people on the internet put down that Alabama running back for "only " squatting 500 in season. He doesn't lift weights for a living, he runs, he jumps , he practices, he takes a tremendous pounding. Could he have done it for a set of 5? Maybe if he leaned a whole bunch on rep 4 and 5 and then been sore for 2 days. Can't do it. Better off doing a single with 500 and leaving. Mentally knowing that 500 is always there for him, even inseason is a mental plus for he and his teammates for sure.