Bill Starr passed away a few weeks back. For those of you unfamiliar with him, he was an Olympic lifter, an author, and a helluva coach. He had been everywhere as a coach: The University of Maryland, University of Hawaii, Johns Hopkins, and way back when, the Baltimore Colts.  He wrote for a bunch of magazines and he was an author. He wrote the end-all-be-all book of football training, The Strongest Shall Survive, among other books. 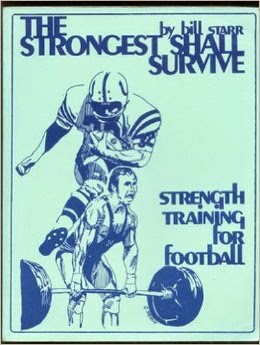 I didn't get to know him until about seven or eight years ago. My friend and current Drexel Head Lacrosse Coach Brian Voelker had been coached by Starr at Johns Hopkins when Voelker played lacrosse there. "Starrman" was what he called him, and he loved him as a coach.

So Voelker says that he knows him and I got all excited with a YOU KNOW BILL STARR!!?? and he said that we would go visit after Starr got back in touch with him. Starr was a minimalist to say the least and he didn't have a cell phone.  He did have a phone, a landline phone, but it was hooked up to a fax most of the day.  What one needed to do was to fax Starr with a message and he would call you later on.

The next day, Voelker came to see me. He called, he said. We are going down tomorrow. And off we went to Aberdeen, Maryland. Starr grew up in Havre de Grace, Maryland, on the upper Chesapeake Bay and was a country boy at heart and a farm boy when he was younger. He now lived in an apartment in Aberdeen, close by to where he grew up. We arrived and Starr and Voelker did some catching up while I took a look around the place. He had tons of paintings everywhere, ones he painted himself, and they were quite good.  He had plenty of books and magazines and yellow notebook pads (He did all his writing on them) and a television set with a VCR.  No DVD player, and no cable.  Three channels. Seinfeld was his favorite show.  A few tapes of Willie Nelson in concert sat on the VCR.  He was a huge Wille fan.  A worn out copy of Tao Te Ching sat next to his favorite chair.  That was his go-to book.

After a half hour or so, we went downstairs and got into Voelker's car and Starr took us on a tour of Aberdeen and Havre de Grace, complete with the spot where the British Soldiers landed during the War of 1812.  Starr actually wrote a novel with the war of 1812 as a backdrop, so he knew a whole bunch about it.  And we are driving and then he tells me that he used to work for Weider back when Arnold first came to this country.  And he told me one story where Arnold was tired of not being paid by Weider so he said screw it and went to the airport to head back to Austria.  Weider raced to the airport to intercept his biggest cash cow, and the rest is history.  And then he told us stories of Franco and some pro wrestlers that were famous back then.

We get back to his apartment and walk over to a restaurant that was in the bottom of a Ramada Inn. I swear, I have had cream of crab soup all of my life, and this soup was the best that I have ever had. Starr drank Miller High Life exclusively, three to four a day.  He had a few that night. He ate a burger and skipped the bun. I was peppering him with questions the whole time. He actually worked with the Baltimore Colt's when Unitas was there. Unitas. Unitas. Anyway, he told me that when Unitas tore his Achilles Tendon that he rehabbed himself. How did he do it? He began by walking. Then he started jogging.  Then when that felt good, he started running. Made sense to Starr. Unitas also told him, along with Earl Morrall, that if they were younger players, that they would have lifted weights. But they felt like that at their age it was too late for them to start.

He told me a story about Mike Curtis, the All-Pro linebacker. Curtis came up to him and told him that he was going to strict press 300 pounds. His best at the time was 250. So Starr says, you sure? And he says, I'M GONNA PRESS 300 POUNDS. So he puts it on the bar and misses. And then, and Starr said he had never seen anything like it, Curtis gets stark raving crazy fired up and on the second try, gets it, presses 300 pounds. And Curtis wouldn't lift if Starr's girlfriend was in the gym, no women when he was lifting. So Starr had to ask her to leave. We also talked about Maryland and how tough those guys were in the 70's when he was there, and how he lived in the dorm and the head coach wanted him to cut his hair. Starr said that he would have cut his hair in a second, but only if he got paid a little more money. And then he told stories about the players at Hawaii and how some of them would come to the workouts under the influence of a particular herb and he had to figure out a way for them to get the most out of the workouts when they were in that particular state.

From what I could glean from our conversations,  I don't know if he ever made any money at any of the places that he coached. He loved it and would do just about anything to coach; drive a shitty car, work crazy hours, live in the dorm. I am telling you, money and material things did not mean a damn thing to this man.  He lived for the people that he coached, he kept tabs on them, he followed them in the papers if they were coaching. If you wrote him a letter asking for training advice, he became your pen pal and personal trainer. He was a good man. One of those guys that you meet that makes you think, I can learn things from this man, I can get better by just taking him in, by being around him.

The next time that I saw him, I brought my assistant at the time, Brett Crossland, to meet him.  I, of course, faxed him first and then he called me and Brett and I headed down. When we got there, Starr asked us if we wanted something to eat. He had some soft shell crabs that he wanted to cook us. I know those as a delicacy, a true Marylander loves these things. You eat the whole crab, guts and all, and legs and arms and lungs. They are amazing. And they also aren't cheap. So Starr starts cooking and then he brings it out and serves us. Man, they were delicious. Now Brett being from cattle country Texas had no idea about a soft shell crab and once he bit into it, and I explained that it was the whole crab, he was backing away pretty quickly in his head. And then he committed the mortal sin that is just not done: He left some of the soft shell on the plate. I was telling him to finish it, motioning to him, mouthing the word, FINISH IT! And he was shaking his head, uh-uh and I was like YES and he was like NO and then Starr came in and saw Brett's plate and asked if something was wrong with the crab and I said, Brett just doesn't know how good he has it, Coach. And we left it at that.

Then I say, Coach, Brett doesn't like the high pull as a clean assistance exercise, and Starr, who loved the high pull, says, what ?and Brett explains how it teaches bad habits like bending your arms and not bringing your hips through. So Starr says, come into the bedroom. We get in there and there are magazines and papers and articles piled up, but there is also a weight set, an olympic bar with 45's on each side. So Starr starts instructing Brett on the high pull and Brett starts to do it and he's not doing it to Starr's satisfaction and then Starr says, FASTER! and PULL IT OVER YOUR F*%KING HEAD! and Brett says, but Coach I will hit the ceiling and Starr says, I DON'T GIVE A SHIT, DO IT! And Brett does it and sure enough, he puts those plates right into the ceiling, leaving two bumper plate indentations.

Everyday, he lifted in his bedroom and then went for a walk.  A forty five minute walk. And on his way he stopped by the Goodwill store to see if they had any good books. He woke up at two pm everyday, and stayed up all hours of the night. You knew not to stop by before two and you knew to bring some Miller's if you came by.

The last time that I saw him, I was coming back from a rough visit with my sister. She was in Johns Hopkins at the time, suffering with cancer. I needed a boost and I decided to go see Coach.  I got off at the Aberdeen exit and went into the Seven- Eleven that is up the road a bit from his place and purchased a twelve of Miller High Life and headed to the apartment. It was great to see him and he was cordial as always and understanding. His hip was messed up pretty badly, I don't think that he was able to go for his daily walks. He was in some pain. But he didn't complain, he just listened to me.

It's strange when your mentors start to go. It happens, and this weird feeling of being sort of alone washes over you and it is definitely a feeling of despair, and then you reach for the phone to ask them some advice or a question about training or about life and then your hand stops short and it hits you. I can't do that, you think.

I don't know. Maybe the right way to look at it is to be grateful for the conversations that made you see things differently and the advice that rang so true and of course, the cream of crab soup, and  to be thankful to have someone that special for even a little bit of time.