Training Considerations and The Old Cowboys

I get asked alot about considerations for an older lifter. Maybe it should be more "What I Have Learned After Training for 30+ Years.", because there are so many individual considerations when it comes to training.

Of course, I believe in the basics, but there are basics that may change because of injuries over the years. For instance, I squat exclusively with the Safety Squat bar because after back surgery, the straight bar irritates my Sciatic Nerve. So I am squatting but with a twist.And I made a decision to squat instead of deadlift. If I deadlift, my back gets fired up. Of course, when I have deadlifted, I always go too heavy instead of just stopping at 315. Stupid stuff. Still learning.

I think that the key is to consistently change your training. Meaning that sometimes you focus on low reps and hitting an all time best set of 1-3. And then 6 weeks later you change to doing 5 sets of 12 with 30 seconds rest of each exercise and 10-15 sets a bodypart. Another time during the year, you focus on boxing or prowler work or running stadiums and just hit one or 2 exercises for 5x5  and only train with weights 2-3 days a week. ALSO, go outside and do kettlebells or chop wood and then sprint. Press dumbells to failure and then do a minute straight of kettlebell swings. Squat your bodyweight for a minute and then run hills. Being outside and training is the BEST. One of the best workouts I had last summer was when my son and I and the dogs were staying in a cabin and I brought my kettlebell and did a mess of swings every morning then went fishing.Then you can fish and drink beer, You earned the right because you got your swings done first.

I think many injuries occur because people are doing the same old things with the same range of motion and the same exercises over and over. Both physically and mentally it can start to wear you down .A friend of mine has squatted every Monday for 30 years and now when he squats, he gets hurt all the time. Hell, I told him why! Switch it up. Front squats, sled drags, RDL, then do his squats. It would force him to lighten up also. Put his ego away. But he would still be training. And that's the key. The action of training. And then sometimes, have no plan at all, but go by feel. Which I reckon is a plan in itself, but it is liberating. You have to have some fun doing the damn thing.

Just read this book, Empire of the Summer Moon. What a great book. The Comanches and the Settlers, and the wars and the kidnappings and the brutality from both side. And especially how tough ALL of them were back then, even the children. The Comanche children riding horses at age 6, the settlers constantly fearing slavery and kidnappings, the scalping, the torture, the horse stealing, the buffalo. The being burned alive. The little kids that were kidnapped and became part of the tribe and took on the lifestyle of the Tribe, even marrying into the tribe.Also,  I couldnt believe all the uses for the whole buffalo that the Indians had, including the brains, hide, bones, intestines....nothing was wasted.  Great book. 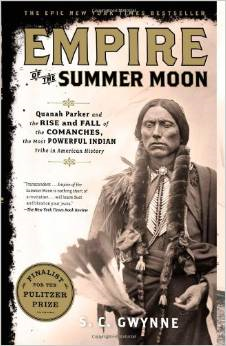 A Football Life on the NFL Network has some of the best profiles around. The other night they had one on Roger Staubach. Bad ass show all around.

ROGER FREAKIN' STAUBACH.  Watching that show took me back to my days as a Cowboy fan.

Huge, huge Cowboy fan when I was growing up. My whole family was, especially when the Colts were run by Irsay and man, we all disliked the Redskins in my house. Although I did like some of the Redskin players. Russ Grimm was one of my favorites. But Theismann, what a jerk. Im sure he was an okay guy, but not to my family. Hotdog.

We were such huge fans because of Randy White, local Maryland boy made good. More than good. One of my earliest football memories was in 1974 and the Terps were playing Tennessee in the Liberty Bowl and all I heard at the "Bowl" party that my parents were having was Randy White did this, Randy White did that. I was 7 years old. And he knew my dad who was a professor at Maryland, and he hustled his butt off and bench pressed a house.

So he gets drafted and we become fans. Every meal was delayed if the Cowboys were playing. Especially Thanksgiving. Eat before or after the game. Never during. My cousins would be over at the house and they were Skins fans and if they were playing the Cowboys and even made one little comment, it made me nuts. I held it in, but I would be fuming inside. My Cowboys.

And I watched every play. I studied Randy White and read everything that I could get my hands on about him. The head Athletic Trainer at Maryland used to get the Dallas Cowboy's Weekly and would save a bunch of them up for me. His wife would then drop them off in the mailbox at my house. Seeing her pull up at the top of the road made my heart race. Id sprint up the steps and grab those things and read them from cover to cover. And if something was in there about Randy White, it really made it special. In 1977 my dad and I went see the Cowboys and Redskins play at RFK Stadium. Damn  it was cold. I remember these towering punts by Danny White and I remember what a thrill it was to actually see Randy White in person. And Roger Staubach. And Drew Pearson. And Harvey Martin(23 sacks that year). Tom Landry. I remember looking over and seeing Landry and he actually had that hat on and everything just like when he is on TV. And Dallas won 14-7 when Roger sneaked over for a touchdown. And then they won the Super Bowl that year and all was great. Until Roger retired after 1979. then it was a long time before they made it again. Not until Jimmy Johnson. But back then? I was a super fan, memorizing stats and player's hometowns and dying to just know about the Cowboys and how that all worked out there man, glimmering building and ranches and Larry Hagman and it seemed like a magical place to live and to play.

1978: Dad comes home one day and he says that he has a surprise for me. Randy White is coming to Maryland for a recruiting weekend. He was Defensive MVP that year, 1978. My father was great friends with the head coach at Maryland, Jerry Claiborne. Randy walks in, comes right over to me and we begin talking. He spent so much time with me that my dad had to let him go eventually. He would have stayed and talked all day, and my dad started to feel bad about us keeping him. It was some magical stuff.
Fast forward many years and I actually had the chance to interview him for Startingstrength.com, and the other day, we talked on the phone about martial arts training. Ain't that some stuff! 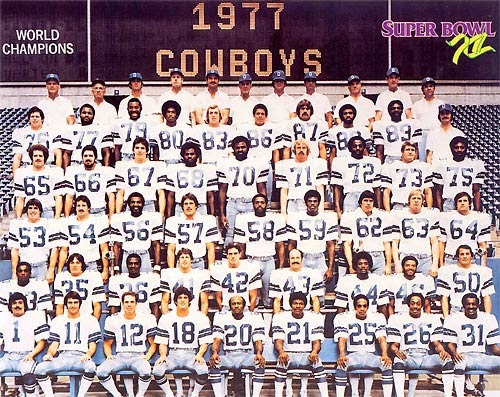