Thoughts on the Squat

The squat is the ultimate exercise.

Heard that one before? Maybe not so much any more. In the 1980's, when Dr. Squat and Tom Platz reigned supreme, the squat was the way to go for not just big legs, but for overall growth.  Supposedly the squat was so hard that it forced you to grow all over.

I figured it out the other day. Conservatively, I reckon that I have done over 49,000 squats over the years. That is a bunch of deep knee bends. I am sure that I screwed my math up somehow, as it has never been my strong suit. Let us put it this way, I have done a mess of them. I didn't feel super comfortable with the squat right away (the deadlift was always a " natural" movement for me), but kept at it. I made myself do tons of them because unlike today where gimmicks and gizmo's rule, you had to squat if you wanted to be any type of lifter. We didn't have bands or chains or wobble boards or balls or even squat suits. We did have wraps, but we didn't wear them until you were squatting a maximum. Wraps were big back then, it was just part of it, and there was no shame in "wrapping up", it made you feel cool actually, like the KAZ or something.

I remember in the ninth grade when I was on top of the world because I had done 225x10, 250x10, 275x10 in my friend's basement. I was so happy and when I was done my legs were shaky but it was so grand and a feeling of accomplishment. I ended up squatting some decent weight when I was older but I was just as excited after that training session as any of the ones in later years.

And everybody was benching and the squat was , to me, more of a test of your guts and fortitude. And I never felt a connection with the bench. Do you have exercises like those? Where the exercise just doesn't feel natural to you? The bench was that way for me, and I would try too hard and my form would suffer and I'd get tendonitis and I'd say, screw it, I will just squat, squat, squat. And bent over rows. I'd squat and bent row and I guess that I would do some nose breakers or something. I always loved doing lots of reps because I loved that feeling of the burning of  the lungs and the quivering of the thighs. On some sets I would see my pulse in my eyes during the last few reps.

I remember one time my friend's and I did a hellacious rep workout with front squats. Right after that, I went down to the creek behind my house and caught a beautiful Brown Trout. The creek is about 200 yards straight down from the house. Well I was determined to get that trout up the hill and into my Dad's fish pond before it died. I was attempting to run up that hill but my legs were barely cooperating. I was yelling "Front squats!" to my friend as I was wobbling with the still breathing fish in my hand. I did make it eventually and so did the fish.

I tried the 20 rep squat program for awhile. That was okay. Great for development, not for strength. The best program that I did for squat strength was the Russian Squat Workout from Dr. Fred Hatfield's book, Power. There is plenty of volume, and the percentages are always 80% and above. You start to feel as though 80% is no big deal at all because you are in that range so much. Whereas traditional programs have you work up to one all out set, this one had you stay in the medium heavy zone constantly. I always responded better to that type of training, and went on to follow Sheiko's programs also with success. I recommend that type of volume for powerlifter or even athletes who are looking to smash some barriers in their squat. 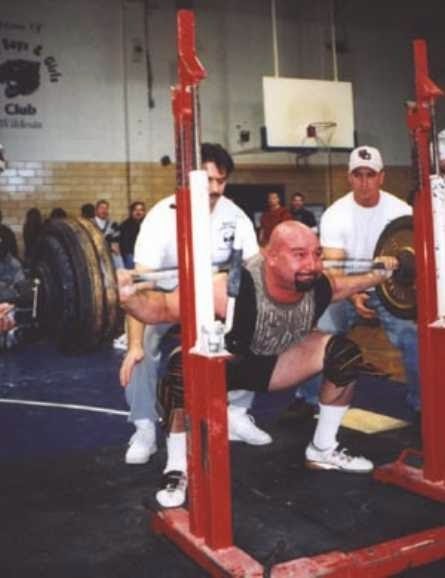 What else about the squat?

Half squats are no good.

The Safety Squat Bar is amazing.

Speed in the descent is one of the keys to a big squat(for most).

You have to give up your low back sometimes to squat a big weight. No it isn't good for your back, but you are competing and anytime you are attempting to go beyond, it's not about health.

You have to stay with the lean to keep the bar over the middle of your foot.

Sometimes you still may be sore for a week after a good squat workout. Wear it as a badge of honor. Then go squat again.
Posted by James Steel at 7:40 PM