Did any of you catch Marcus Lutrell on 60 Minutes? Anybody read his book, Lone Survivor? I have done both. What the hell, man? There are people , men like that in this world, and I am so thankful for them.

You watch these interviews, watch the story of these men fighting for each other and you think about how sports are ,well, truly not that important. It makes one feel less worthy for sure. It makes one feel envious of the love and comraderie that they have their fellow team members.

I guess when you have done something like have been a Seal, everything else pales in comparison to the rest of the things that people think are important. They must have some frustration for the whining of the citizens of the world after what they have been through.

Lutrell's story is amazing, inspirational, unbelievable, disturbing, and touching. He is alive, and he feels guilty about it. His buddies all died.

He gets back from Afghanistan and then goes to Iraq. In Texas, someone murders his Labrador. Shit, he has been through it. And then the families of the men on his team. Losing their sons, living everyday with it.

And it makes you hate politicians who have never served but are quick to send out boys to fight, but then the soldiers explain that they don't care about all that, that they just want to do what they have been trained for and to fight for their country and brothers.

I choose to focus on these men, how inspiring they are to me. The training, so brutal, and I read the books and see that with that training, comes this amazing appreciation for each other.

You think your football championship reunion was special? Imagine what it feels like to have a 25 year reunion with your men who you fought side by side with in battle.

I see a movie star complain how hard their job is, or hear a rock star explain how he just wants his privacy, how tough he has it. After watching Lutrell, that kind of stuff makes me want to throw up.

I'm getting ready to read Service, A Navy Seal at War by Lutrell. I can't wait.

That 60 Minutes piece yesterday was awesome. and humbling. Lutrell, limping, on his ranch with his
service dog. 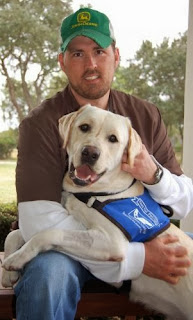 I also caught him on Youtube the other day, with the cast of the Lone Survivor movie with his service dog at his feet, answering questions patiently. But you could see the fire inside of him as certain questions came up, the ones about why the goat herders weren't killed who discovered his Seal team especially.

Damn, I am impressed by Lutrell and and all those guys. Amazing people, awesomely brave men.
Posted by James Steel at 9:49 PM