I went down to my friend Steve's farm in Maryland the other day to train Labs to hunt. That is what Steve does, and he is good at it.

I brought Storm and Bas. Storm is 10 weeks old, Bas will turn 9 years in August. Oh man, puppies are a pain.  Labradors especially. They pick up everything and they get into everything and they are constantly hungry. Storm could eat the southbound end of a northbound skunk. Hungry.

But let me tell you, hunting Labradors are sweet as hell also. And also smart and eager to learn.


Steve trains Labs like a mad man and I sit back and learn from him.  I watch, I shut my mouth and I learn. The Labs he trains quiver with excitement as they prepare to retrieve. It is awesome. They are so much better than people. Never questioning, they just GO! Elite athletes all of them, and no bravado, or silliness...just work and work and love of work.

And the old man, Bas, did around an 80 yard mark through the pond and brought it back in a straight line. Now, seriously, and this is a stone cold fact, Bas and I have a special thing going on, He reads me man, he knows everything that I want. He goes, he does things that I don't even have to express....of course, his dad was a marking fool, a famous dog whose frozen sperm alone was worth 1200 dollars a shot . And think about it: I have worked with Bas pretty much everyday for his whole life. He should know me by now. 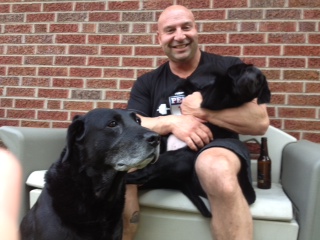 And then we did socializing with Storm...basically introducing her to gun shots and calls and whistles and small creeks and other dogs. You have to do it. She is like a sponge, everything that you do is a learning experience, every minute is making her better...and if you don't know what you are doing, could be making her worse. But you ease into it all. She is nervous and scared as she crosses the creek and you don't force her. She tries and she succeeds because she doesn't want to leave you, to have you get too far away.

And Bas just goes. He moves on, he is searching for game. All business. Bas has never cared for much affection. Maybe late at night when he is feeling like being petted and slightly lonely. Mostly, he has a work , work, work philosophy.When I reach to pet him, he pulls away. Throw Dad, I want to retrieve. Screw all of that affection, man.
But he was walking deep in the woods, and then when he got too far, I tell him, "Too far", and he circles back, and Storm sees this and learns it as she watches her big brother. It speeds up the training process and is very cool to see.

I feel sorry for people who don't hunt, or know the joy of a dog. I wouldn't trade any of the moments with them, good or bad, for much of anything else.
Posted by James Steel at 8:09 PM