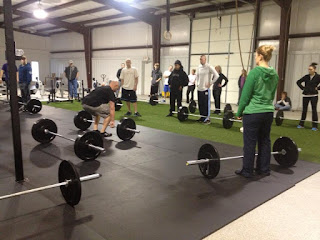 My son James and I just came back from our annual late December trip where we visit my 12 year old son, Donald. We get a hotel room, and play wiffle ball and wrestle around, and eat Krispy Kremes and my long lost brother and great friend Jimmy Anderson spends time with us and Donald and James play video games while I train at Rock Fitness.

In general we have a blast. Shelby, the town where we stay, is country and the people are super friendly. It is a welcome break from Philly/New Jersey for me.

Because it was Donald's birthday, he gets to choose what we do, where we eat, where we go. We were deciding where to eat on Friday and Donald recommended the China Buffet on Route 74. He swore it was the best food around. James is 6 years old, and has never been to a buffet of any sort. His eyes lit up when he saw the all-you-can- eat desserts. I warned him to take it easy, but he loved the baby oranges bathed in some sweet syrup. He kept eating them along with pudding, marshmallow salad, etc.  The food was pretty bad in general. Donald was happy as a clam, eating his egg rolls and Jimmy was eating away too. I tried the sushi which was a big mistake, as I had to get some Alka-Seltzer soon after I was done.

We continued on with the day, going to Target, hanging out, fooling around. As we settled into our beds at night, James sleeping with me and Donald in his bed, I noticed that James was restless. He usually sleeps like a rock, no moving  around whatsoever.

At exactly 12:46 AM, James blurted out," My stomach!" and promptly puked all over me and on the sheets. I picked him up and ran with him to the bathroom, but he was spewing baby oranges and everything else from the buffet. I put him on the shower, obtained some cleaning products from the front desk, changed the sheets and put him back to bed. A short time later, he was at it again, running to the bathroom. I yelled, "In the toilet!", but being 6, he decided to puke right in front of the toilet. He actually turned away from the toilet to hit the floor. 6 year olds do unexplainable things sometimes. They are 6, remember, so you can't get mad. I just started cleaning again. Baby oranges bathed in syrup. Never again.

So we didn't get much sleep that night. I was worried because I was scheduled to present a seminar at Crossfit Allegiance in Denver, North Carolina the next morning. Fortunately, I got a few hours in before the alarm rang, and we all headed out to Denver.

Crossfit Allegiance is owned by my good friend, Jill. She decided one day last year that she was gonna open  a gym, so she saved up her money, visited other gyms, asked questions, designed a business model, and then....she did it. She opened a place. I love that type of guts in a person, someone who realizes that life is short, so let's go for it while we can. She has been open for a month now, and she begins her day at 5:30 AM and ends the day late. She is the coach at the place, the only coach, but she is making headway each day.

To be truthful, I always dread one aspect of giving seminars- the guy who is the KNOW IT ALL. He is usually someone with a decent size upper body and tiny little legs who lifted weights ONE TIME with Captain Kirk or who benched 385 "back in the day", or maybe he is trying to impress a girl at the seminar. This guy usually talks when I am talking(an unforgivable sin), which shows a total lack of respect as well as a shitty upbringing from his parents.

I was pleasantly surprised at Crossfit Allegiance. Everyone was eager to learn. We had about 22 people who worked their butts off for 2 hours learning the deadlift, the squat, the press, the clean, the push press, the front squat and the push jerk.

Cristi Bartlett, my fellow coach from Penn, met me there and assisted me and demonstrated and helped coach. She did a helluva job as always.

We break down the lifts step by step, focusing on the little things that most people don't know about the lifts- the setup, where the pressure should be in your foot, your head placement, the speed of the lifts, etc,.

Everyone performs the lifts also. We keep an eye on everyone and make corrections as we go, being careful to slow it down and do it right, making sure to never rush though anything. We want the attendees to learn many things in  the session, sure, but we want them to execute the lifts properly, every time. I'd rather them learn a few things and do them perfectly than a bunch of things but never really learn the correct way to do the lifts.

I can't say enough about the folks at the seminar. They did a super job.

Afterwards, we actually found a place in North Carolina that has decent pizza. I think the owner was from Brooklyn or something. Below New Jersey, good pizza is a rare commodity. I am from Maryland, and grew up on frozen Pizza Oven pizza on Powder Mill Road. We thought that it was great.  Little did I know that just about every neighborhood in New Jersey has better pizza than Pizza Oven pizza.

I trained twice when I was in Shelby, at a place called Rock Fitness. I always go there. They let you squat and deadlift and use chalk. The girl at the desk charged me 5 dollars a day. My kids sit there and play video games while I train. My sons  have grown up hanging out in gyms, so they are used to them. I asked my son Donald one time, after a particularly long training session, if I should shadow box or ride the bike. He answered, "Whatever gets us out of here faster!", so they do get bored sometimes in the gym.

Jimmy and I wolfed Krispy Kremes and drank some Budweiser's and talked about old times back at the hotel. We coached together in 1989 at Gardner-Webb University and we have plenty of stories to rehash. We always talk about how we where in charge of washing all of the player's uniforms, and we washed them once a week, every Thursday. Then we put them in a big pile on the locker room floor when we were done and the players picked through them to find theirs. What's funny is even with the infrequent washing, we didn't have one instance of Staph infection, not one. And although we didn't have ladders, a strength coach, functional movement screening, foam rollers, bands, chains, any machines except a neck machine, we had VERY few injuries. I mean, we would have like one guy blow out his knee a year and then you wouldn't see him for awhile. No torn Labrums, no hip flexor strains, a few hamstrings here or there. No water bottles at all, just a PVC pipe from a hose at one end of the field. Full pads every day except Friday. We talk about it, and we laugh and we say, damn, times have changed. If you screwed up, like got in grade trouble, or in trouble with the law, the big penalty was that you had to run 100 MILES to get back on the team. 100 miles. You met a coach at the track during the week and you started running. I think that it was like 5 miles a day. You do that now to an athlete and you are on the front page of the paper and the parents would be going crazy about cruelty. We laugh about all of it, Jimmy and I.

And then James and I say goodbye to everybody and it gets painful to leave and you tell yourself that it will be just a few months until you see your son again. And tears are shed and the trip to the airport is quiet, awfully quiet. And you sit on the plane and wonder about all of it, it all seems like some big dream. I always focus on the minute, and that helps , and I focus on James and the joy that he gets out of looking out the window of the plane, and being allowed to have gum on the plane, stuff like that. I really have to do that, or I will go crazy with nostalgia and worry.

We land and in my head I start looking forward to training, to dieting, to the  discipline of it all. These are activities that I use for a stress release and  where I find great comfort. And I look forward to seeing my wife and my one year old, Max. Thinking of them makes me smile.

James doesn't understand all of that, he just knows that he misses Donald, and that it gives him a weird feeling. It's just life, I tell him, and that when he is older he will understand it all a little better, even though I know that it's not entirely true. You never really get used to it, but you try to make sense of of it all. I always think, damn, if James wasn't here, I would really be a wreck right now. He takes my mind off all of it, for sure.

The trip was fun. It always is. I am not sure where or how to end this column. As I continue to write, I am getting sadder and sadder and missing Donald. I am going to call him and check on him right now. Thanks for reading. 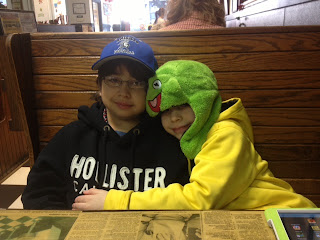