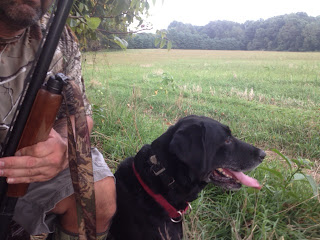 So I have a Black Labrador retriever named Bas. He is as badass as they come. He hunts and lives his life with such fervor that it is super inspiring to see. His bloodline for hunting retrievers is superb, his dad being a Master Hunter and a very famous dog for breeding and competition.

When Bas hunts, every sense is alive. He whines, he circles me, he scans the skies for birds, he gets frustrated when I miss, and when  a bird goes down, he literally trembles with anticipation as he waits for me to send him. And then when I do send him, he sprints full speed through any obstacle in his way, through anything; briars, corn stalks, limbs, it doesn't matter. He knocked a wounded goose over one time and sent it flying; it was a Butkus tackle with a 50 yard head start. The dog that was first sent out chickened out when the goose hissed at her. Bas launched himself into the goose and brought it back to me head held high.

We don't get to go hunting very often, but I work with Bas on his retrieving skills everyday. He has never, ever, ever, not gone full speed after the bumper that I throw for him to retrieve. It is full speed to the bumper and full speed back with the bumper. Everything in his life is attacked with such fervor that Bas will die one day knowing in his dog brain that he did everything all out all of the time. Now I know that he isn't self aware like that, but maybe that is the beauty of his life: living it full speed, focusing on the moment and being happy to be given the opportunity to do what he loves daily, without even thinking about it.

I think about the stuff that clutters up my life and most of our lives and it gets too be a lot doesnt it? All the crap, utter crap that becomes a part of you, the cell phone, the laptop, the talking just to talk, the wasted minutes in line, etc., .

And then I think about folks that I admire most, my father, Johnny Unitas, my son's Urologist Dr. Carr, Hemingway, Randy White, Pat Tillman, Mike Webster to just name a few. And those people live or lived everyday one hundred percent.  Seeing Dr. Carr walk into an operating room is a sight to behold. The aura around this man is palpable.  In control of all situations, confident but yet humble.

Hemingway? Of course he was full of faults. But to read his biography is a lesson in never sitting still, realizing what he wanted to do, and living it, not just talking about it.

Randy White and Mike Webster played and practiced hard everyday. The rest of the list is the same, all out, all of the time.

And to live a life where there are no regrets, one where you are lying on your death bed knowing that you did all that you had wanted to do, must be a joyous, satisfying thing, yes? I am not even close to getting there, it is a constant battle to be reach the goals that  that I have set inside for myself.
I guess that the big goal or the goal first and foremost would to be to live all days like Bas- attacking all tasks with intensity, never looking ahead to the next task or looking at mistakes made in the past, just the now. Just the present.

I had someone tell me once that worrying is one of the dumbest things that one can do- it only hurts you and doesn't help anyone at all. Better to take some action and if there is no action to take, put it in the back of your mind and focus on what you can control. Wise words and advice indeed.

And that goes back to the Bas- like life. Intensity, focus on the present, joyous in tasks performed.