Book of the Month

Tears In the Darkness 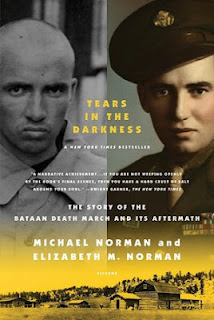 I have read this book all the way through twice now. It is the story of the Bataan Death March in World War II and the men who survived the march and the subsequent prison camps. It focuses on Ben Steele, one of the marchers, but also gives the Japanese side of things and uses interviews and diaries from the other men on the march.

This book is hard to take. If you ever, ever feel sorry for yourself, read this book. That feeling will diminish quickly. The POW's were starved , beaten unmercifully, beheaded for helping each other, forced to bury each other alive, denied water, denied medical care, and basically treated worse than I ever thought that another human can treat another human. It will make you cry, it will make you furious, it will make you proud of the American POW's and their fighting spirit.

The sheer will of these men to survive was amazing. Most men during the march had walked fifty miles. Many without fresh water;  "So the marchers had to sneak a drink on the run or during a rest break, and the only water within easy reach lay in the bottom of the drainage ditches, carabao wallows, and the small stagnant pools beside the National Road...it was a foul drink, putrid and brackish. Gnats and flies swarmed above green scum on the surface ..it was not unusual to see soldiers crazed with thirst on their bellies around some stinking stump or muddy cistern."(Kindle,location 4058) The crazy thing was that there was fresh water all around , but the Japanese were told to hurry the march along, so they wouldn't stop to let the men drink from the wells off of the road.

Once they arrived at their location, the men were herded into holding areas where "Thousands of  men were suffering from dysentery , and the ground where the prisoners were forced to sit and sleep became coated with layers of excrement, mucus, urine and blood." (Kindle,location 4340)

The prison camps were a horror, where the men were left to rot and die. If they survived, they were lucky. If you had a fever of 103 degrees or less, you had to work. Malaria, dengue fever, beriberi were just some of the rampant diseases in the camps. Never mind the weevils in the food that most men ate anyway, or the maggots in the men's wounds.  Wet beriberi was one of the worst diseases, caused by a deficiency of vitamin B1(thiamine). "Without Thiamine, the body's cells begin to break down and the walls and arteries and veins grow so weak and porous that they allow pints of fluid to leach into the surrounding tissue and body cavity, turning a man into a bloated hulk."(Kindle, location 6200). Ben Steele's had "eye sockets so swollen he'd have to hold an eye open with one hand so he could see to eat with the other hand." (Kindle, location 6212)

Eventually, Steele was taken to Japan to work as a slave in the coal mines.  The Americans, even through it all, took no crap from anyone, and sabotaged the equipment in the mines and faked like they were working so that production slowed down. At one point in the mines, they were actually forced to slap each other in the face for a half hour as a type of punishment.(Kindle, location 7048)

Eventually, rescue comes, war trials begin and end and Ben Steele heads home. And it is a relief when the men are no longer prisoners, when they can eat something without bugs crawling in it, when they can sleep in a bed instead of in excrement. These men were the ultimate survivors and warriors, displaying tremendous heart and grit.

Get this book, you will not regret it. It will make you thankful for what you have, it will make you realize that you really are not that tired or hungry.  It will definitely get you off of the couch . This book shows you just how cruel humans can be, but it will also show you how humans can survive just about anything. I highly recommend it.
Posted by James Steel at 5:59 PM