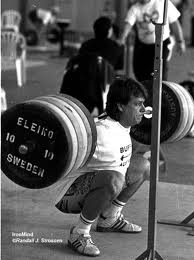 I was thinking this morning about how training, particularly my training goes in cycles. When I played football in college, I trained for football. I had a set objective:get stronger and in shape to be a better player.

Then I discovered powerlifting and after seeing some numbers of some top lifters, I decided that I wanted to hit an 800 squat, 500 bench and 700 deadlift. It took me some years to get there, to do that stuff in a meet, but the objective was defined, the goal was always out there. I trained for that goal.

That was in 2002, ten years ago. Now, what do you do when you meet your goals and you still love to train? You just train. You try new things, like boxing, hill running, kickboxing. But you still keep training, lifting weights. Why? because you know that strength is the foundation for everything in life. There is no denying that fact. The stronger you are, the easier it is to do most everything in life.

Sometimes my workouts are awful . Like today. I was supposed to deadlift, and the bar was moving like molasses. Oh well, I already deadlifted once this week, so its almost like I had some equity built up and I was allowed a crappy workout. And another thing, I should have known that it wasn't gonna be a good one, if I looked at what I had done this week, but who really cares, anyway? I felt like deadlifting the other day, and squatting twice in one training session so I did. Screw it. You learn, move on. My point is that the training gets done, the weight room training. Not always ideal, but you train  to stay strong. You have kids , a family, a job, worries , concerns, all kinds of things come up.

But you must, you absolutely have to keep training. Work around it all, squat and leave, press and leave, pull and leave. After that, everything is gravy, anyway. I laugh when people say that they don't have time. Oh yes, you do. I have said it before, and I am no sage, but its common sense- don't text, don't turn the computer on to surf the Internet, don't eat lunch, don't talk on the phone just for the hell of it, get up an hour earlier.... you have time. Keep training.
Posted by James Steel at 12:13 PM