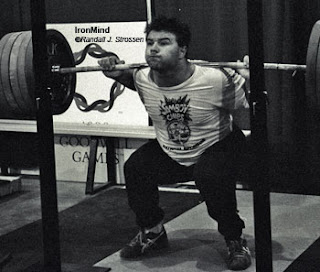 With everyone seemingly cutting down their training to recover, the thought process in my head is swinging back the other way. Maybe everyone should train more.
I have had times in my training when I was bored with assistance work(including benching) and just wanted to do some basic barbell training without worrying about hypertrophy, or  sets per bodypart or whatever. I was at a point where my squat didn't feel natural to me and I was frustrated and basically sick about it and pissed off to boot.

I was living in Crisfield, Maryland at the time, around 1999 and decided that I wanted to squat 600 without belt or suit or wraps in a USPF meet. I was really fascinated by the Bulgarian training hall tapes and was watching them incessantly.They put everyone else to sleep but not me.All those athletes did was squat, pull, press, over and over, over and over. So I started squatting every day. Well, pretty much every day. I maybe took 1-2 days a week off.
One day I would take 405 and do it for some reps. Usually one set of 12 or two sets of 8. The next day, I would work up to a few singles, 545-565lbs. The next session would be 500 for some reps, usually a set of 5.
I bumped the weights up when I felt like it, but as long as I hit those weights, I was fine. Some days I would be so sore that I would just barely get the weight. But after awhile,after a few hard sessions,  I would feel great and the weights would feel light.

I deadlifted once a week to ten days, and I would pull a single at 550. I also did sets, maybe 5, of bent rows without straps, with anywhere from 315 to 350lbs for doubles.
I benched once in awhile.

I ended up getting the 600 and the crazy thing was that I pulled like 675 or something. It was nuts how strong I felt.

I revisited this type of training a few years later when I hit a stalemate in the squat again. I was sitting there watching tv one night and was pissed off. I couldn't feel the "groove" in my squat, it didn't feel natural. I was once again, only squatting once a week. I was so irritated that I got up and went to the gym. I put on 405 , and somewhere around the 8th rep, it started to click, the groove that is. I did 21 and each rep felt easier than the one before. Eureka!I had a watershed moment. Squat more often, dummy.

I was training for a meet at the time where I was going to where a suit, belt and wraps. The problem was, using all of that stuff was boring and tiresome. I had to have "handlers" which pissed me off even more. I always wanted to just be able to walk in anywhere, alone, and squat. I took it off after awhile and just started squatting without all of it on and squatted more frequently also-pretty much every day. Again, I only deadlifted once in awhile, maybe every 7-10 days and for a single.
In the squat, I would work up to some gearless singles or doubles and then do a few down sets of singles and doubles.I set "minimums" in my head- no matter how I felt, I had to get something like 550 for a single. If I felt stronger than that, I would keep going. I watched those Bulgarians train without getting all fired up and I endeavored to do that also, just approach it in a workmanlike fashion.The groove returned and stayed there and when I put the gear back on, I felt strong as hell and had my best meet ever.

So fast forward to now. I'm training a doctor friend of mine and he is trying to find the groove in his squat and I am having him squat once a week. And I am thinking about it one day and I am saying to myself, how the hell is he going to get better squatting once a week? That's 52 squat workouts in a year! Not enough.

Its not like Coan or Kirk who have a million squat workouts behind them...and maybe Coan or Kirk would be even stronger if they did squat more frequently. Then my buddy Jimmy sends me a John Broz link  and he is talking about squatting everyday and I'm like...ok, now we need to get back to the stuff that I used to do that really works.

And If your recovery ability is a little is compromised because of age or injury, go a little lighter, but still do it, perform the exercise. So now the good doctor is going to squat everyday, even if it is just the bar. Grease the hell out of the groove and it will become a natural movement for you.

Maybe that is why there are so many injuries these days! Because everybody is so concerned with recovery and getting rest, maybe we never force our bodies to adapt and overcome. Maybe just when the body is getting used to the work load, we back off and then the injuries mount. But that is another subject all together, one that will require a whole 'nother column in the future.
Posted by James Steel at 7:58 AM