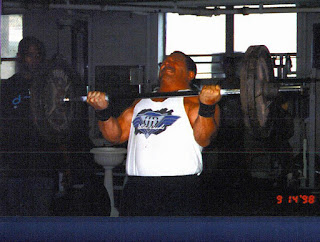 I get tons of questions on just how Kirk trained. I love this split , and use it all the time with people.

When I was around him, here was his training split:

Day 1- Monday- Squat- working up to a heavy set. He would cycle 8's for awhile, then 5's, then 3's and 2's as the weeks went on. Because he was so strong, his volume was still pretty high, and the tonnage was also. The most impressive squatting I have seen was when he did 800x5 deep as hell with just a belt. To me, that is more impressive than 1000x2 with equipment. 800x5 with a belt?! Buy his dvd and check it out, it's on that and is simply amazing.

Kirk would hit some hack squats after squatting, but only if his knees weren't bothering him. Basically, he would squat and leave. I told Jim Wendler about that at a seminar in Texas that we did together and he loved that- Squat and Leave!

Day 2-Tuesday-
Arms- close grip bench press, ez curls, db curls. Heavy on all of this. He cycled the close grip and worked HEAVY on the db curls, strict with the 80's and up.

Day 3-Thursday-
Deadlift
same kind of cycling as the squat, but usually lower reps because of grip issues. Lots of doubles and triples here. He then would do Kirk Shrugs like I have written about before. They were for his grip and trap development. He also at times, did some t-bar rows, focusing on squeezing at the top. He felt like they contributed to his back development.

Day 4- Saturday-
Bench Press- lots of sets of 5 here, heavy and pausing. Eventually, before a meet, he would do heavy doubles and singles.
Then he would perform some wide gip benches- usually 2-3 sets of 5
Incline press- heavy sets of 5 here
Lateral raises- he would work these on a machine, just a few sets.

No pressing, lat pulls, pushdowns dips, etc. He just liked barbells, and training heavy. I saw him a few weeks ago, and he is still the thickest person I have ever seen. Years of heavy, heavy training with sets of 3-8, lots of protein and carbs, and a never-say-die attitude was what set him apart. He used to go out to drink beer, and mix his MET-RX with it. Now that's dedication!
Posted by James Steel at 3:13 PM